The incident occurred on July 22 when Municipal Corporation workers came to seize the egg cart and warned of issuing a Rs 100 challan to 13-year-old child. 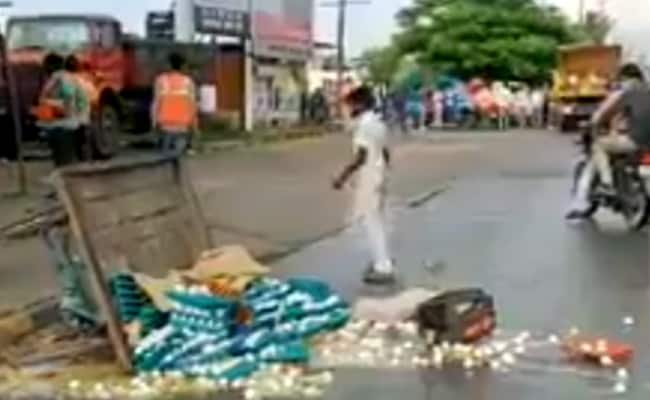 Ramesh Mendola, a BJP MLA from Indore-2 constituency has assured to provide a house under the Pradhan Mantri Awas Yojana to the child, whose egg handcart was allegedly overturned by Municipal Corporation workers in Indore.

During the incident, four cartons of eggs broke which was worth Rs 7,000 to 8,000. The incident left the teen in tears. A passerby recorded the entire incident and it became viral.

Many people came to the boy's aid by giving him thousands of rupees in cash. Congress Rajya Sabha MP Digvijaya Singh has promised to bear the expenses of the teenager and his brother's education while sending him Rs 10,000 as financial assistance.

"I got a call from Congress leader Digvijaya Singh who promised us of better education and sent me Rs 10,000 through our known person Chandrashekhar Raikwar," Mr Paras told ANI.

Mr Raikwar confirmed on the phone that BJP MLA Ramesh Mendola also gave the boy a bicycle, four pairs of clothes and Rs 2,500 along with the assurance of providing a house under the Pradhan Mantri Awas Yojana. Also, Indore Press Club president Arvind Tiwari and others helped him by providing monetary assistance.

Vikas Rao, who made the video of the incident, told ANI, "On July 22, at 5:45 pm, I saw this child was looking disturbed. Before I shot the video, the egg cart was overturned from the pavement on the road."

"The behaviour of the Municipal Corporation workers was very bad towards the boy. So, I uploaded the video on social media to help the child," Mr Rao said.