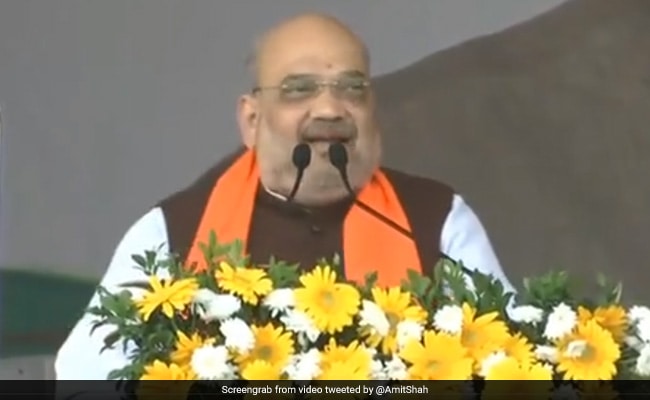 With Union Home Minister Amit Shah cancelling his visit to Matua stronghold Thakurnagar in North 24 Paragans district on Saturday, senior BJP leaders Kailash Viayvargiya and Mukul Roy met prominent members of the commuity and assured them that the central minister will hold a meeting for them "very soon".

They told the members of the community that Mr Shah's visit to Thakurnagar was cancelled due to sudden developments in Delhi and that he will visit the place "very soon" and address the Matuas during his next visit to the state.

Former Trinamool Congress MP Mamatabala Thakur on the other hand said the cancellation of the scheduled meeting showed that Mr Shah had nothing concrete to offer to the Matuas regarding the citizenship issue.

"Amit Shah spoke to Santanu Thakur over holding the proposed meeting on any coming day and asked the organizers not to dismantle the stage originally erected for the meeting," Mr Roy told reporters.

"Please don't dismantle the stage and keep yourself ready for all last minute arrangements in 24-48 hour notice. My office will keep you posted," Mr Roy quoted Mr Shah as having told Santanu Thakur.

Meanwhile, Matuas living in pockets near the Bangladesh border who had come to the headquarters of the sect looked distraught with the sudden change of plan and left the venue.

"Shah could not come due to developments in Delhi. He is a busy person. We are ready to wait for him," a member of the community said.

Mr Shah was scheduled to address the meeting at Thakurnagar on Saturday during his proposed two-day visit to poll-bound West Bengal from January 30. He, however, cancelled his visit at the 11th hour.

The Matuas with an estimated population of 30 lakh in the state, can influence the poll outcome in at least 60 assembly seats in Nadia, North and South 24 Parganas districts of West Bengal.

The community is divided into two groups - one siding with the BJP and the other with the ruling TMC spurred by the National Register of Citizens and the Citizenship Amendment Act.

A group of them even demonstrated at Thakurnagar against the CAA.

The Matuas originally hail from erstwhile East Pakistan, now Bangladesh, and began migrating to West Bengal in the beginning of the 1950s, mostly due to religious persecution.