Delhi Chief Minister Arvind Kejriwal and AAP leaders have been blaming stubble burning in Punjab for the rising pollution levels in the national capital. 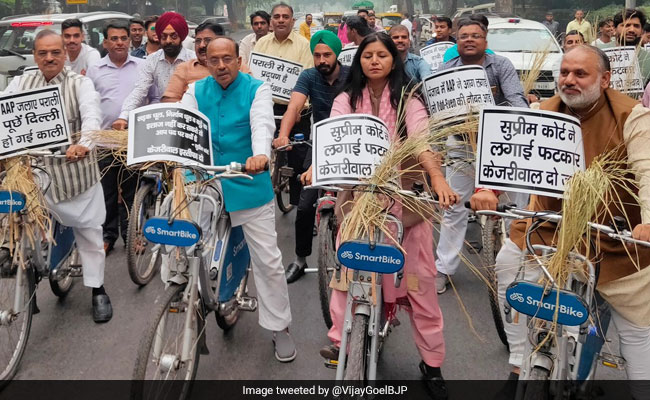 In his protest against stubble burning, BJP MP Vijay Goel on Thursday carried crop residue on a bicycle to Delhi Deputy Chief Minister Manish Sisodia's residence and accused AAP MLAs in Punjab of encouraging the practice.

Mr Goel, along with Delhi BJP leaders, staged a protest outside Mr Sisdoia's residence on Mathura road in Delhi.

"We are carrying paddy stubble for Sisodia in a protest against his government''s failure to do anything to curb air pollution in Delhi and the role of AAP MLAs in Punjab behind stubble burning," the senior BJP leader said.

Delhi Chief Minister Arvind Kejriwal and AAP leaders have been blaming stubble burning in Punjab for the rising pollution levels in the national capital.

"Kejriwal and his party members are hypocrites. On one hand, they are blaming stubble burning being responsible for air pollution in Delhi and on the other hand, the party's MLAs in Punjab are instigating and encouraging stubble burning," Mr Goel alleged.

Rubbishing Mr Goel's allegations, Manish Sisodia said he was earlier holding internal sources in Delhi responsible for the air pollution in Delhi, but at least he is accepting now that the stubble burning is responsible for it.