The Chief Minister has announced that she will contest from Nandigram seat, of which Mr Adhikari was the sitting MLA, besides her Bhowanipore constituency. 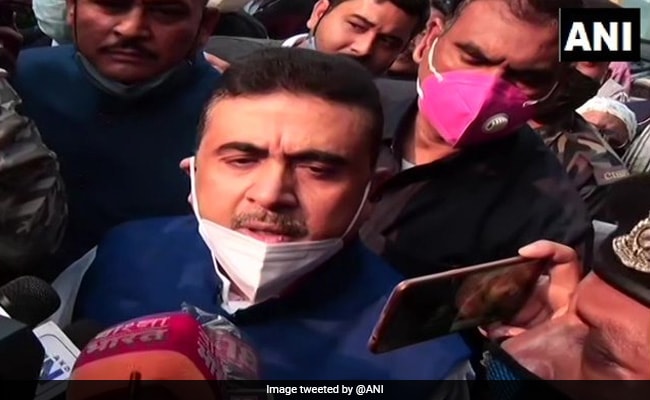 Mamata Banerjee may also declare that she will contest from Domjur or Bally seats: Suvendu Adhikari

BJP leader Suvendu Adhikari on Tuesday claimed that more MLAs will desert the TMC in the coming days and wondered whether West Bengal Chief Minister Mamata Banerjee will contest from their seats as well.

The Chief Minister has announced that she will contest from Nandigram seat, of which Mr Adhikari was the sitting MLA, besides her Bhowanipore constituency after the former transport minister in Ms Banerjee's cabinet quit the ruling party in the state, sparking an exodus of TMC leaders to the BJP.

Ms Banerjee has announced that she will contest from Nandigram seat where she will be trounced. Besides, her vote share in Bhowanipore constituency has also shrunk drastically since the 2019 Lok Sabha elections.

"The TMC supremo may also declare in the coming days that she will contest from Domjur or Bally seats. But wherever she goes, she will face the music," Mr Adhikari said while addressing a public meeting.

The TMC turncoat claimed that "lotus will bloom" in the entire Adhikari family by Ram Navami and even in the Banerjee household by mid-February.

Lashing out at Banerjee again over the Victoria Memorial episode, Mr Adhikari asserted that "Jai Shri Ram" has been used as a greeting for a long time and wondered why the TMC supremo gets angry on hearing the chant.

Ms Banerjee refused to deliver her speech after "Jai Shri Ram" slogans were raised from the audience in the presence of Prime Minister Narendra Modi as she stood up to speak at Victoria Memorial on the 125th birth anniversary of Netaji Subhas Chandra Bose on January 23.

"Ram Rajya means ushering of good governance where every citizen -- from farmer to worker -- is happy.

''Jai Shri Ram'' has been used as a greeting as Lord Ram is integrated into our psyche. "He loves and cares for every resident in his kingdom but why does our honourable CM get upset on hearing the chant," Adhikari said.

State BJP chief Dilip Ghosh told reporters in Kolkata that from now on, Ms Banerjee will be greeted with "Jai Shri Ram" wherever she goes.