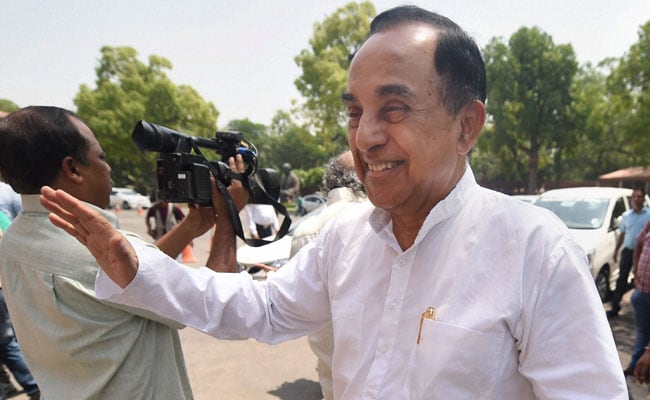 BJP leader Subramanian Swamy said one cannot advocate, write and propagate what one wants in the name of free society or democracy. (File photo)

Bhubaneswar: Calling for liberation of Indian literature from the "impact of Left ideology", BJP leader Subramanian Swamy today said one cannot advocate, write and propagate what one wants in the name of free society or democracy.

The Rajya Sabha member said literature, which actually deals with exploitation and miseries of certain people, should also celebrate the unity of India.

"I think, we must celebrate the unity of the country as it has sustained and remained one despite pressure. The celebration is a must because many other countries have been divided. India remains one since the 1947 Partition," Mr Swamy said in his key note address at the Kalinga Literary Festival in Bhubaneswar.

The USSR has been divided into 16 parts, Yugoslavia into four and Indonesia and Pakistan into two each, Mr Swamy noted and said India on the other hand remained one and continued to remain one despite adverse predictions.

"Literature can better thrive in democracy," he said, adding that chaos had prevailed for some time in the name of intolerance.

There was no need for award "wapsi" as the institutions of democracy were in full strength and elections were taking place in the country, he said, noting that there were two schools of literature, one with the old Left ideology and the another new cultural nationalist group.

Mr Swamy said the Constitution of India had certain restrictions and one must go by that for the better health of the democracy. He, however, said the people who run freely for 65 years are not ready to accept the fact.

"Our fundamental rights have reasonable restrictions. We must act keeping eye on the public order," Mr Swamy said.

He alleged that the British rule before Independence attempted to divide India into Dravidian and Aryan segments on racial lines.

Mr Swamy also narrated his old story of how he collected the hair sample of Raj Thackeray and an UP taxi-wallah and put them into laboratory test and found the DNA of both were one.

Mr Swamy also said there was a need to revisit the Indian history book as the British people have incorporated certain wrong things. Left wing ideology is also there in the literature, he pointed out.

"You cannot advocate, write and propagate what you want in the name of free society or democracy. There is reasonable restrictions in it as said in the Constitution," Mr Swamy said.