A late-night statement by Kanpur Police Commissioner, Asim Arun, confirmed that the police had included BJP leader Narayan Singh Bhadauria's name in the FIR after they came across a video confirming his presence at the spot.

A BJP leader in Uttar Pradesh's Kanpur town faces a police case for allegedly helping a wanted criminal escape after his arrest.

A late-night statement by Kanpur Police Commissioner, Asim Arun, confirmed that the police had included BJP leader Narayan Singh Bhadauria's name in the FIR after they came across a video confirming his presence at the spot from where wanted criminal Manoj Singh was allegedly allowed to escape.

The escaped man faces over a dozen criminal cases, including serious charges like murder, extortion and rape.

Soon after the incident, Dr Veena Arya Patel, BJP's Kanpur south president, removed Mr Badauria  from the party post and ordered a three-member team to submit its report in the matter within 24 hours.

The incident took place on Wednesday afternoon in an area called Naubasta in Kanpur. A team of the UP police had arrested Singh from a paan shop outside a guest house where a birthday party of BJP leader Bhadauria was taking place. Singh was reportedly part of the celebrations too. 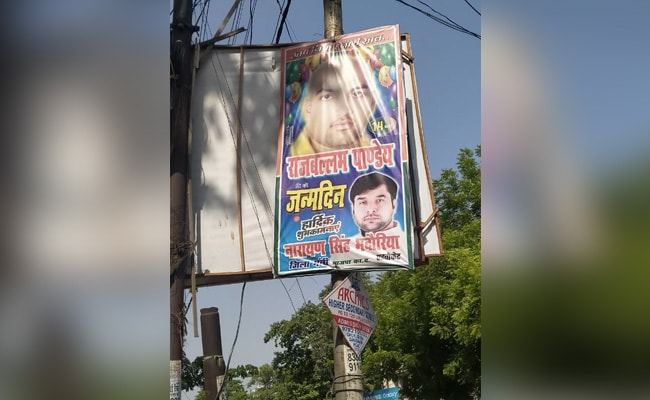 Mobile phone videos taken by onlookers showed police officers in plainclothes and some in uniform dragging Singh to a police jeep, followed by hundreds of people who were arguing with and pushing and shoving the cops. The police did manage to bundle Singh in a jeep, one of the videos shows.

A second video, taken from a different angle, shows the police jeep in the middle of the road surrounded by a large mob. Suddenly, the mob clears the area and men can be seen running along all directions on the road. A few cops can be seen giving chase. This is when Singh escaped, say cops.

"They were successful in freeing Singh. We have filed a case under serious sections of the law. We are taking all steps to arrest the accused," Raveena Tyagi, a senior police official in Kanpur, said in a statement to the media.