It also highlights "arrest, intimidation and harassment" as job benefits and demands the ability to shoot videos as one of its "qualifications", although warning potential candidates "we will use it against you" 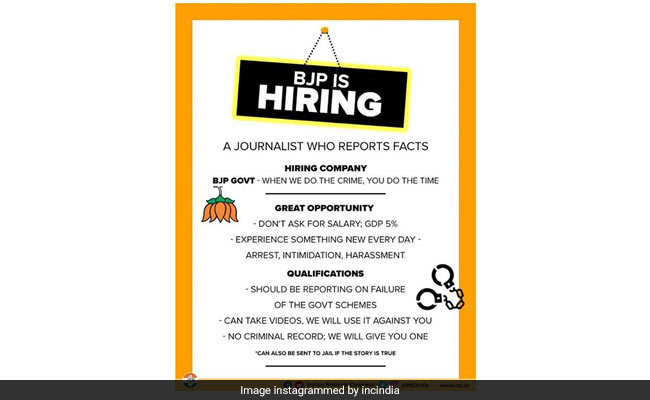 The BJP is hiring "a journalist who reports facts" but "can also be sent to jail if the story is true" the Congress claimed in a social media post today, in an apparent reference to the Uttar Pradesh government that filed a case against the journalist who posted a video of school students eating rotis with salt as part of a flagship mid-day meal scheme.

The heart-breaking video, which shows 100 students from Siur Primary School in Jamalpur block of Mirzapur district of eastern Uttar Pradesh squatting on the floor and eating a single roti with a pinch of salt, was shot by Pawan Jaiswal, who works for a local Hindi daily called Jansandesh Times.

The video ought to have spurred the state into taking action but instead led to a first information report against Pawan Jaiswal. The FIR accuses him of cheating and criminal conspiracy and says he should have arranged for vegetables instead of reporting the truth.

The Congress's Instagram post was in the form of a job requirement posted by a BJP government that operated under the tagline: "When we do the crime, you do the time". The poster also featured an inverted lotus, which is the symbol of the BJP.

It also highlights "arrest, intimidation and harassment" as job benefits and demands the ability to shoot videos as one of its "qualifications", although warning potential candidates "we will use it against you".

Anurag Patel, a senior government official in Mirzapur district who ordered the enquiry that led to the FIR, has claimed Paswan Jaiswal deliberately made the video in order to defame the state government.

"There is a different way to make news. If you hear the audio, someone (the village head's representative who has been charged and arrested) is calling him and saying come here and make a viral video and come and be part of a conspiracy," Mr Patel said, arguing that as a print journalist Pawan Jaiswal should have stuck to taking photographs.

The Uttar Pradesh government's decision to file a case against Pawan Jaiswal has not gone down well within the BJP, with Delhi BJP chief Manoj Tiwari calling on Chief Minister Yogi Adityanath's government to honour him instead of threatening him with jail.

More than 100 journalists protested the case filed against Pawan Jaiswal. The Editors Guild of India also condemned the state government's action and urged it to withdraw the cases.

Meanwhile, according to the Congress other benefits of the "BJP government's hiring" include "don't ask for salary; GDP 5%", in an allusion to Union Minister Anurag Thakur's attack on former Prime Minister Manmohan Singh and former Finance Minister P Chidambaram.

Mr Singh recently said the state of the economy was "deeply worrying" and that "all-round mismanagement" by the Modi government had resulted in the slowdown. He also said the last quarter GDP growth rate of five per cent signalled that "we are in midst of a prolonged slowdown".

In response, Mr Thakur claimed that during the Congress-led UPA government the economy had suffered from double-digit inflation and had grown at below five per cent.