They Want To "Deport" Priyanka Gandhi, "Jungle Raj" Back In UP: Congress

Priyanka Gandhi Vadra was on Friday detained and stopped from going to Sonbhadra where 10 people were gunned down this week, triggering a standoff with the BJP government in Uttar Pradesh. 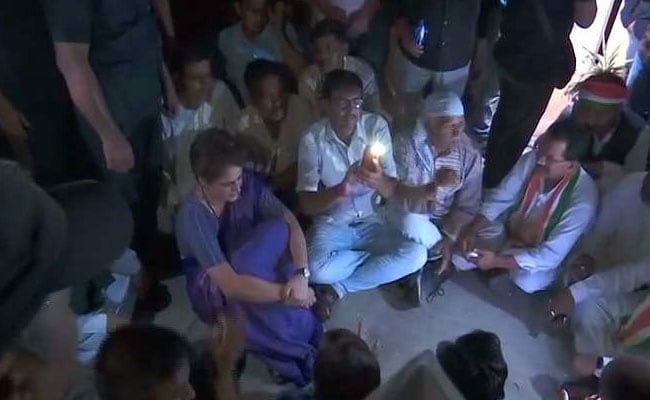 The Congress alleged today that the BJP government in Uttar Pradesh wants to "deport" party general secretary Priyanka Gandhi Vadra so that she cannot meet the victims of the Sonbhadra clash.

Congress also alleged that "jungle raj" was prevalent in the state and the government had failed to take action against the guilty.

Priyanka Gandhi Vadra was on Friday detained and stopped from going to Sonbhadra where 10 people were gunned down this week, triggering a standoff with the BJP government in Uttar Pradesh.

Refusing to furnish a personal bond, the Congress general secretary stayed put at a guesthouse in Mirzapur district where she was taken after she sat in protest on the road with her supporters, insisting that she be allowed to proceed and meet the victims' families.

BJP Govt cuts Elect/Water of Chunar Guest House where she is held!

BJP Govt now wants to deport her from U.P!

On Friday, Chief Minister Yogi Adityanath suspended a sub divisional magistrate and four policemen. Twenty-nine people have been arrested so far in the Sonbhadra case.

"BJP government cuts electricity/water of Chunar guest house where she is held. BJP government now wants to deport her from UP. Jungle Raj!" he said.

The Congress on Friday also targeted the Uttar Pradesh government over the detention of Priyanka Gandhi Vadra, with former party chief Rahul Gandhi terming it as "illegal arrest".

Attacking the BJP dispensation, the Congress had alleged that human rights violations were taking place in the state and asked if the Yogi Adityanath government be allowed to stay in power on ethical grounds.

The party has planned countrywide protests against the turn of events, with party general secretary (organisation) KC Venugopal writing to all state units and senior leaders to organise such protests in each district and state headquarters.

One such protest was organised in Delhi too following the Priyanka Gandhi Vadra's detention.

"Will the Adityanath government be able to suppress truth by converting the Umbha village (Sonbhadra) into a police cantonment?" Mr Surjewala said.

Why does the BJP government fear Priyanka Gandhi Vadra, he asked.

Mr Surjewala also questioned as to why there was police vigil in all parts of the village when the people there are waiting to meet Priyanka Gandhi Vadra and give a call to justice.

Ten people were killed and several others injured in the clash between supporters of a village headman and Gond tribals in Sonbhadra district's Ghorawal area on Wednesday.