BJP has blamed Congress and Sonia Gandhi for the parliament impasse and NDA lawmakers have foregone their salaries for this session of the parliament. 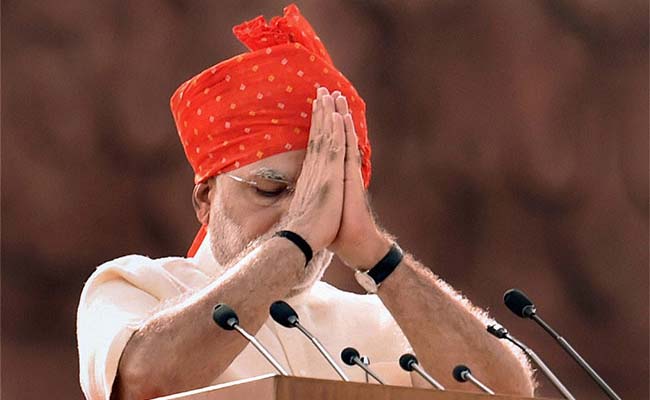 New Delhi: The second phase of the parliament's budget session was a complete washout as opposition parties, including allies of the NDA, vehemently protested against various issues including the establishment of the Cauvery Management Board, farmer's issues, according special status to Andhra Pradesh, among others. As a mark of protest against the disruptions in the parliament, Prime Minister Narendra Modi and other BJP lawmakers will observe a day's fast today.

BJP has blamed the Congress and Sonia Gandhi for the failed parliament session. They also accused the Congress of not allowing any discussion, debate or business transaction to be held in the two houses of the parliament. Terming today's fast as a "farce", Congress and the opposition have alleged BJP deliberately disrupted parliament proceedings to ensure no-confidence moved by Andhra Pradesh lawmakers could not be taken up for vote.

Union Minister Ananth Kumar, in a hurriedly-convened press conference, had also announced that lawmakers of the BJP and its allies will forego their salaries following an abysmal parliament session.

Here are the highlights of PM Modi and BJP lawmakers' and observance of a day's fast:

Apr 12, 2018 14:05 (IST)
Congress and its allies are conspiring to disrupt the atmosphere of "development and trust" created under the leadership of Narendra Modi by the politics of violence and conflict, Mukhtar Abbas Naqvi tweeted.
Apr 12, 2018 13:59 (IST)
I want to ask Rahul Gandhi and Sonia Gandhi, why are you taking salary & perks from parliament when you did not allow it to function? Please give answer to people of India: Union Minister Ananth Kumar in Bengaluru
Apr 12, 2018 13:10 (IST)
Across the country, in every Lok Sabha constituency, BJP workers are fasting for a day to save our democracy: Amit Shah
Apr 12, 2018 12:40 (IST) 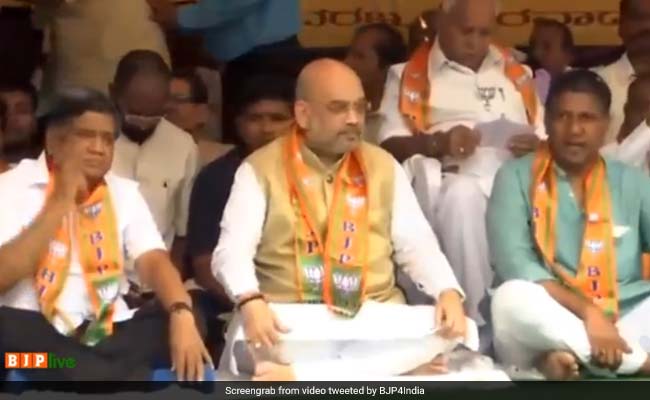 BJP President Amit Shah, BS Yeddyurappa join a "dharna" in Karnataka's Dharwad. Mr Shah, who is campaigning in the state for the upcoming assembly election, is also observing the day-long fast.
Apr 12, 2018 11:43 (IST) 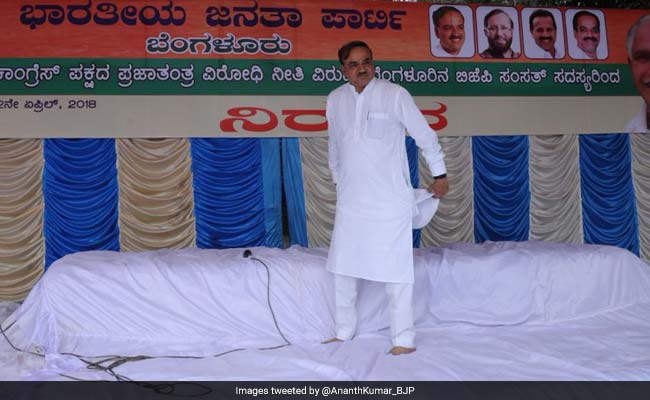 BJP minister Ananthkumar Hegde fasting in front of the Gandhi statue near Maurya Hotel in Bangalore.
Apr 12, 2018 11:33 (IST)
Uttar Pradesh Minister Shrikant Sharma tweeted about BJP workers fasting in Mathura today from 11am to 1pm to protest against the "undemocratic" Congress. 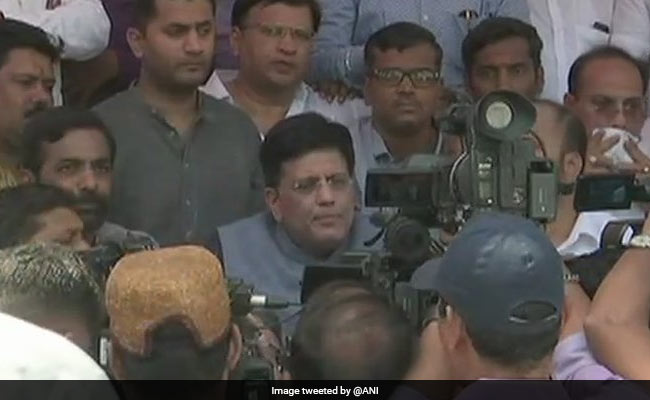 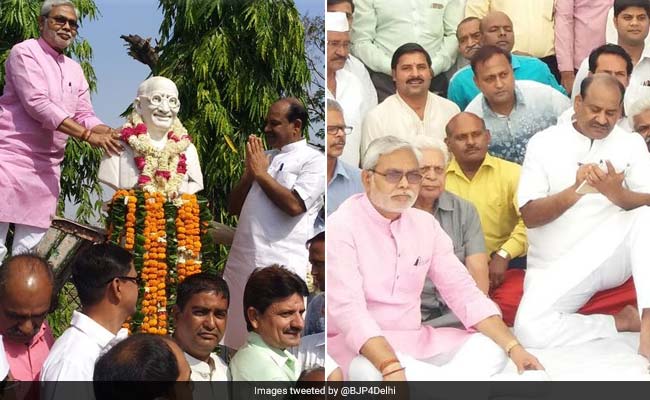 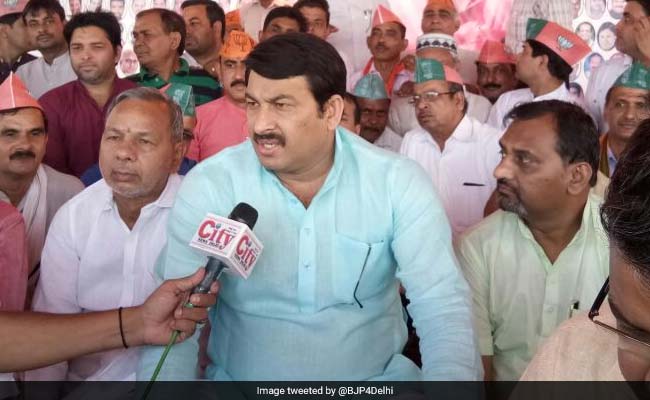 The day long fast by PM Modi certifies his & his own Govt's incompetence.

The message is - he as the PM can't reprimand his CMs, MLAs & MPs stoking violence, can't ensure justice for victims raped by BJP leaders and HENCE has to sit on a fast. PM Modi is a failure. #UpvasKaJumla

I will seek the blessings of Wahe Guru Ji & observe a day's fast In solidarity with PM @narendramodi in Guru ki Nagari Amritsar tomorrow to protest against the attack on India's parliamentary democracy by the family owned @INCIndia The voice of the people cannot be silenced. pic.twitter.com/DYAX39OR32 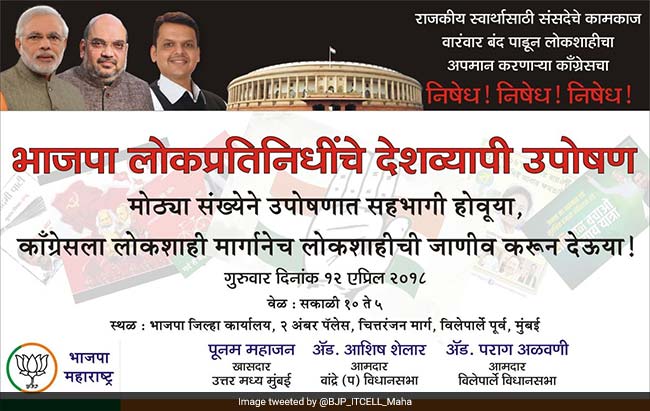 BJP in Maharashtra urged people to join in large numbers and support the prime minister and the BJP lawmakers in their fast to make Congress "Aware of what democracy is in a democratic way".
Apr 12, 2018 09:39 (IST)
Congress tweeted about "A Farcical Fast by a Fascist BJP".

A Farcical Fast' by a 'Fascist BJP'! 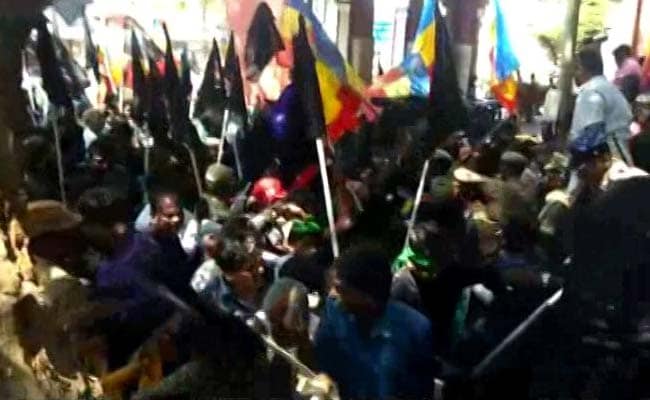 Black Flag protests have begun in Chennai ahead of PM Narendra Modi's visit. Supporters of the opposition have taken to the roads protesting the centre's delay in setting up the Cauvery Management Board as directed by the Supreme Court.
PM Modi, who is fasting today along with other BJP lawmakers, will continue his "routine work" and attend the DefExpo inauguration in Tamil Nadu today, BJP had tweeted.
Apr 12, 2018 09:19 (IST) 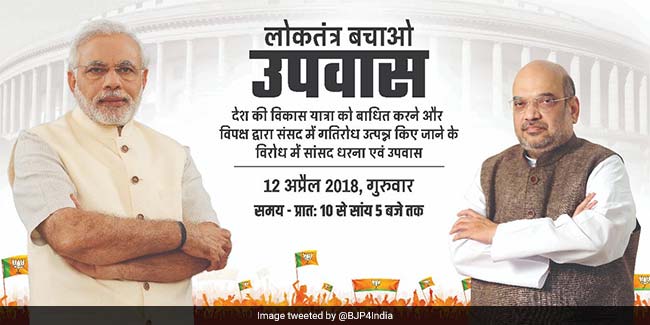 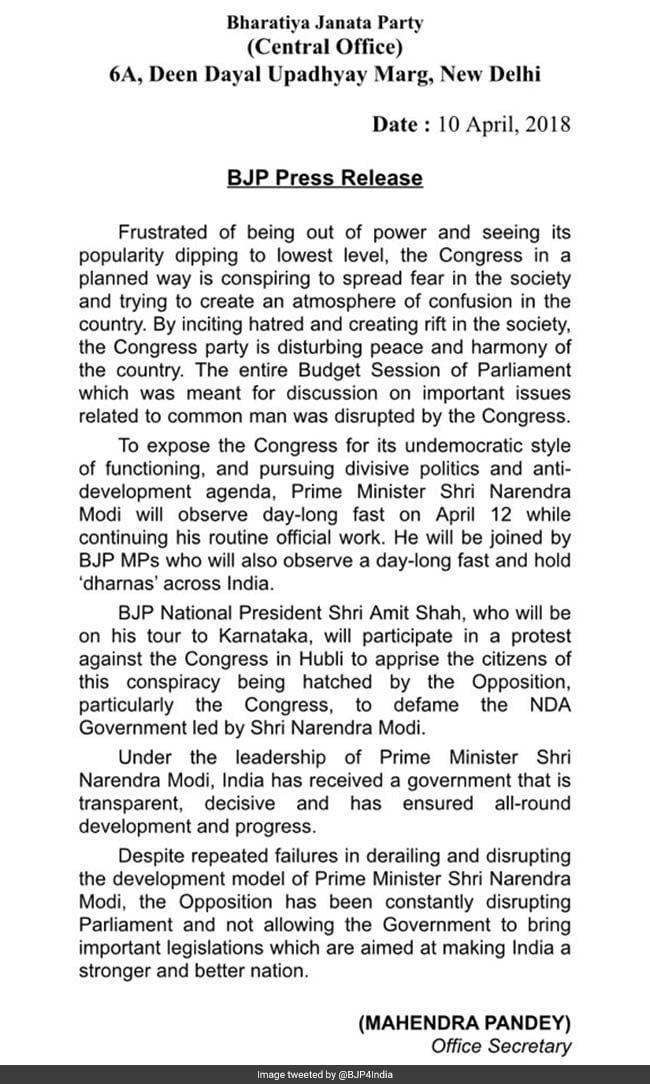 The prime minister, BJP party president Amit Shah will continue their "routine official work" while observing day-long fast "to expose the Congress for its undemocratic style of functioning & pursuing divisive politics & anti-development agenda", tweeted BJP.
Apr 12, 2018 09:05 (IST)
While observing a day's fast, Narendra Modi will reach Chennai by 9:30am, to inaugurate the DefExpo 2018 near Mahabalipuram. Amit Shah, who is also fasting today, will be in Karnataka as part of BJP's campaign trail in the poll-bound state.
Apr 12, 2018 08:35 (IST)

Congress Leaders Ate At Restaurant Before Protest Fast, BJP Tweets Photo
On 9 April, Congress president Rahul Gandhi and party leaders observed a day's fast to protest the atrocities against members of the Dalit community and to promote communal harmony.
But soon pictures of Congress leaders, including Ajay Maken, Haroon Yusuf, Anrinder Singh Lovely and others, surfaced which showed them eating chhole bhature at a popular Dlehi restaurant. Mr Lovely was seen wearing the same shirt in the photo that he wore to the protest venue.
Apr 12, 2018 08:21 (IST)

Lok Sabha Lost Over 127 Hours Due To Disruptions In Budget Session
Lok Sabha Speaker Sumitra Mahajan, in her summary report, said the lower house functioned for 34 hours and 5 minutes in all over 29 sittings. 127 hours and 45 minutes were affected due to "interruptions and forced adjournments", Ms Mahajan said. Of the 580 starred questions only 17 were answered, which translates to "0.58" questions being answered per day, she further said. A whopping 127 hours were lost this session till the house was adjourned sine die.
Only 5 bills were passed and 5 were introduced in the Lok Sabha during this session.