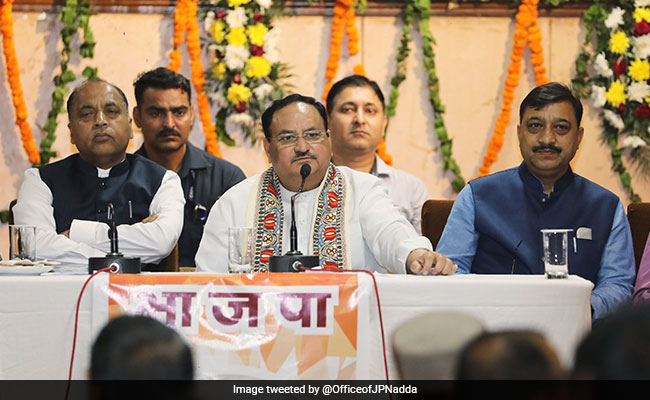 Mr Nadda, who has been overseeing the poll preparations, was accompanied by Chief Minister Jairam Thakur during a roadshow from the Dharamshala airport.

People in large numbers gathered at the airport and welcomed him with flower petals.

He will attend a number of public and organizational programmes during his visit. This will be Nadda's third visit to poll-bound Himachal Pradesh in one month.

Mr Nadda will hold a roadshow in Kullu and address a public rally in Dhalpur Maidan. On Friday evening. The following day, he will also interact with the youth wing in Dharamsala.

Assembly polls in Himachal Pradesh are slated to be held later this year.

Notably, the 'Khalistan' flags were tied on the main gate of the Assembly and walls. One accused was arrested earlier today.

Moreover, Jairam Thakur had on Wednesday held a meeting with Prime Minister Narendra Modi in the national capital and invited him to visit the state to inaugurate various ongoing projects.

"Elections are approaching in Himachal and various parties are getting active in their campaign. We will contest the elections with full might and win them. Himachal will script history when the BJP would return to power for the second consecutive time," he said.

The AAP which has been eyeing Himachal Pradesh after a thumping victory in Punjab, received a major setback after its state unit AAP president Anup Kesari, general secretary organisation Satish Thakur and Una district chief Iqbal Singh, joined the Bharatiya Janata Party (BJP) on Friday in the national capital.

Himachal Pradesh is scheduled to go to Assembly polls later this year.