BJP national president Amit Shah's two-day Tripura tour aims at the party's expansion in the state where the Left has ruled for two decades. 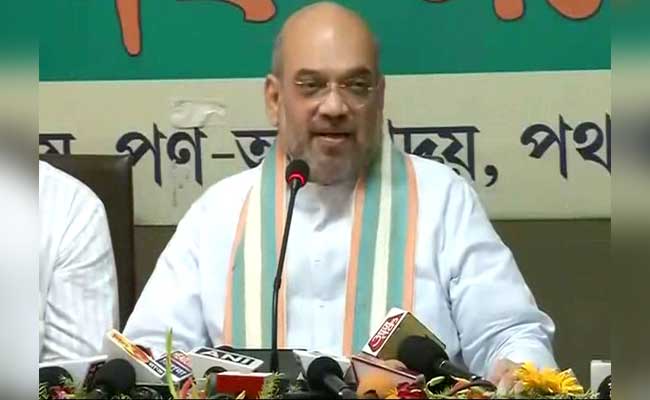 Agartala: BJP national president Amit Shah, who is on a 95-day all-India tour, arrived in Agartala today. His two-day Tripura visit aims at the party's expansion in the northeastern state where the Left has ruled for the last 19 years.

Mr Shah, who is behind BJP's electoral victories in several states, will focus on the alleged lack of development in the state under the Left government and violence against his party workers.

Tripura, with its two Lok Sabha seats, figures high on Mr Shah's priority list as assembly polls in the state are due in 2018.

He will take stock of the party's organisational work in meetings with state BJP leaders and hold a public rally tomorrow.

With the BJP and RSS activists allegedly at the receiving end of violence by the ruling Left, traditionally seen as an ideological enemy by saffron groups in Kerala and Tripura, the BJP chief has been working hard to strengthen the party's grip in the two states.

Having forfeited security deposit in 47 of the 50 seats it contested in Tripura in the 2013 assembly election, the BJP has increased its vote share and its candidates finished second to winning CPI-M nominees in three bypolls held there since.

BJP leaders claim the party has emerged as the principal challenger to the Left and pointed to the recent defection of a top Trinamool Congress leader and some others to the party.

Less than a week after the BJP formed government in neighbouring Manipur, virtually the entire state unit of the Trinamool Congress in Tripura had joined the BJP.

The revolt was led by Ratan Chakrabarty, chairman of the state TMC coordination committee. Mr Chakrabarty had joined BJP with 15 other members of the state committee.
Comments
TripuraAmit Shah95-day all-India tourleft-ruledbjp