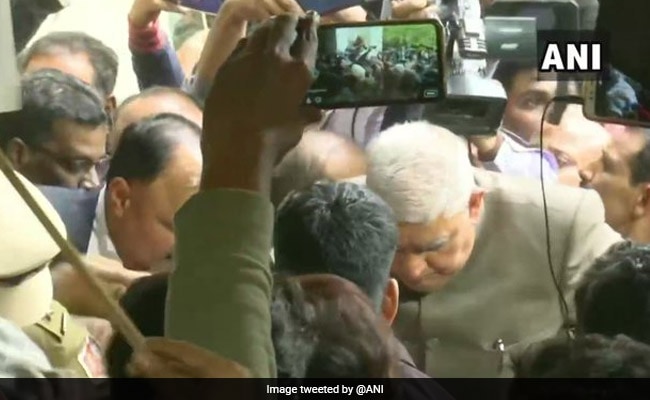 In unprecedented scenes in Kolkata's Jadavpur University this afternoon, Bengal governor Jagdeep Dhankar was gheraoed by black flag-waving students with placards that read "BJP activist Mr Jagdeep Dhankar, go back", when he arrived to attend a meeting of top university's top officials. The students were protesting the Citizenship (Amendment) Act, or CAA, and Mr Dhankar's public statements in support of the act,as well as his "intervention" in Jadavpur University's (JU) annual convocation, which is scheduled for tomorrow.

Hundreds of students were waiting near Aurobindo Bhavan, the administrative block that also houses the Vice Chancellor's office and the moment the Governor's convoy drove up - just before 2 pm, they surrounded it. It was only after considerable struggle against a sea of students that Mr Dhankar managed to enter the building.

However, he was not inside for very long. The meeting was not convened while he was there, for reasons that are still a little hazy, but when Mr Dhankar stepped out to leave the campus students gheraoed him once again.

The Governor offered to take questions but when students sought his reaction to the CAA, Delhi Police's attack on Jamia Millia Islamia students last week and the people killed in anti-CAA protests in Uttar Pradesh, he claimed ignorance.

The students booed him and heckled him as he left.

The meeting of university officials was held shortly thereafter and a decision was taken to defer tomorrow's Special Convocation and hold only an Annual Convocation.

Students had earlier threatened to boycott a Special Convocation and show black flags to the Chancellor.

On Sunday, when Mr Dhankar was informed of this decision he said the university's Executive Council had no such authority and declared it had "outrageously overstepped" its jurisdiction.

Vice Chancellor Suranjan Das later told media the Governor had called while the meeting was in progress and said it should be reconvened at his official residence - Raj Bhavan - this evening.

"But because the meeting had already begun, it was unanimously decided to complete the meeting and pass the decision to hold an annual convocation tomorrow, as planned," he said.

The Chancellor, that is, Governor Jagdeep Dhankar, has been invited to attend but there is no provision for him to address the students or hand out degrees.

The Citizenship (Amendment) Act makes religion the test of citizenship in India. The government says it will help minorities from three Muslim-dominated countries to get citizenship if they fled to India because of religious persecution. Critics say it is designed to discriminate against Muslims and violates the secular principals of the constitution.