The BJP has formally announced seat shares in Bihar for next year's general elections. The division is on expected lines -- 17 each for the BJP and Nitish Kumar's Janata Dal United and six for Ram Vilas Paswan's Lok Janashakti Party. The announcement -- made by BJP chief Amit Shah -- came days after the exit of ally Upendra Kushwaha and ironing out the differences with other key ally in Bihar, Mr Paswan.

Over the last few days, there have been hectic meetings between the BJP chief, senior party leader Arun Jaitley and Mr Paswan.

Unlike Mr Kushwaha, who was resentful over the depleted number of seats offered to accommodate Nitish Kumar, Mr Paswan had been upset over a Rajya Sabha seat he was promised by the BJP when the 50:50 seat sharing formula was announced in October.

After Mr Kushwaha's exit, the LJP's seat share was increased from four to six, but party insiders said Mr Paswan was more concerned about the Rajya Sabha seat, which he hoped to occupy.

Last week, Mr Paswan's son Chirag Paswan warned the BJP of "consequences" that if the seat sharing was not finalised, triggering speculation about the LJP too being on its way out of the alliance. His series of tweets were followed by prompt invitations to join the mahagathbandhan from opposition leader Tejashwi Yadav and Upendra Kushwaha. 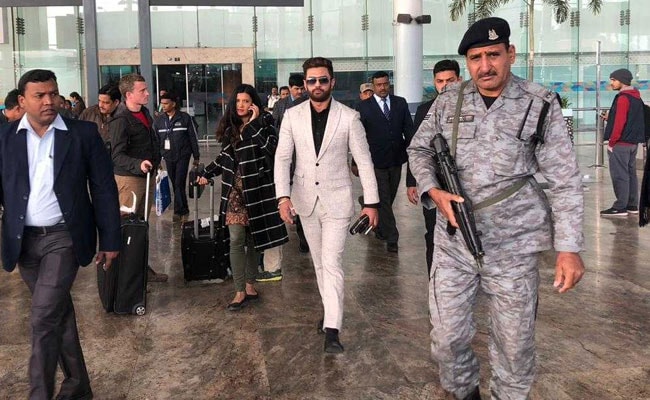 But after the announcement today, Mr Paswan, who attended the joint press briefing with Mr Shah and Nitish Kumar, said, "There was no issue in the alliance. We will fight the elections together".

"We will sit together with the BJP leadership and discuss the issues. We will work towards ensuring NDA's win in 2019 elections," said Nitish Kumar.

Soon after the announcement, Tejashwi Yadav tweeted: "The LJP and JDU got the benefits of asking PM Modi questions about the demonetisation after 2 years.  In spite of having 22 parliamentarians in Bihar, the BJP is only contesting 17 seats and Nitish-ji, who has 2 MPs, will also fight 17 seats. Now you can understand in what condition the NDA is in".

His dig at "questions about demonetisation" was a reference to a set a letters Chirag Paswan reportedly wrote to Mr Jaitley, after the results of the latest round of assembly polls were announced on December 11, asking him to list its benefits.

The BJP had suffered a big setback in the elections, losing the heartland states of Rajasthan, Madhya Pradesh and Chhattisgarh to the Congress and failing to make headway in Telangana or Mizoram.