Tejashwi Yadav said he has equipped his 1, Polo Road bungalow with beds, oxygen cylinders, standard medicines and food for the patients. 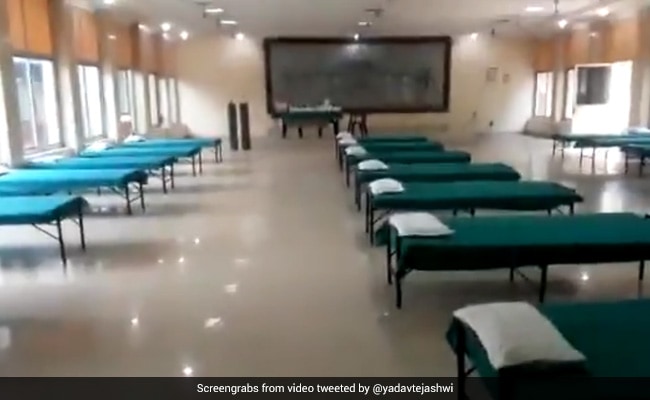 Rashtriya Janata Dal (RJP) leader Tejashwi Yadav on Wednesday declared that he has set up a COVID Care Centre at his official bungalow and urged the Nitish Kumar government in Bihar to provide assistance for upgrade of the facilities available there.

Mr Yadav, leader of the opposition in the state assembly, shared the letter addressed to health minister Mangal Pandey on his twitter handle and said he has also sent a copy of the same to the Chief Minister.

In the letter, Mr Yadav, a former Deputy CM himself, said he has got the bungalow situated at 1, Polo Road equipped with "basic facilities" like beds, oxygen cylinders, standard medicines and food for patients to be admitted there and their attendants.

"I would request the government that additions be made to the amenities in consultation with medical experts," said the 32-year-old who has emerged as the de facto leader of the party founded and headed by his father Lalu Prasad.

In the letter, Mr Yadav lavished praise on his party legislators and office bearers for "reaching out with help to the needy" during the pandemic and added that he expected the government to "act without political prejudice and keep me informed about the steps it was taking" to make the COVID care centre at the bungalow fully functional.

Notably, the bungalow at 1, Polo Road was allotted to Mr Yadav two years ago when he was compelled to vacate his Desh Ratna Marg house, situated adjacent to the chief minister's official residence, after his plea against the government order to the effect was turned down by the court of law.

Mr Yadav had been occupying 5, Desh Ratna Marg since 2015 when he became the Deputy CM, a post he was stripped of two years later following Nitish Kumar's abrupt return to the NDA.

The young RJD leader, who seemingly took affront at the whole episode, refrained from occupying 1, Polo Road, and preferred to stay with his mother Rabri Devi at her 10, Circular Road.

Mr Yadav was berated by BJP Rajya Sabha member Sushil Kumar Modi, who had served as the Deputy CM for most part of Nitish Kumar's first decade and a half in power.

In a couple of tweets, Mr Modi, a bete noire of Lalu Prasad, sought to know why several houses allegedly owned by members of the RJD supremos family have not been placed in the service of COVID patients.

Taking a jibe at medical degrees held by two of Mr Yadav's seven sisters, Mr Modi also asked why were not they coming forward to offer their service in during the ongoing crisis.

Interestingly, 1, Polo Road was occupied by Mr Modi while he was the Deputy CM and he continued to function from there even during the period the BJP was out of power in the state. He was allotted 5, Desh Ratna Marg bungalow after it was vacated by Mr Yadav and the wily BJP leader famously took a team of journalists on a tour of the bungalow to underscore his allegation that Mr Yadav's petulance in letting go of the government building stemmed from his splurge on getting it furnished according to his own taste.

"Shunning politics, you should arrange for doctors there. In case you fail to find medicos, ask your PMCH topper family members to run the facility," he said wryly.