The recent resignation of a state minister reflects Mr Yadav's impatience with those undermining his and Chief Minister Nitish Kumar's authority. 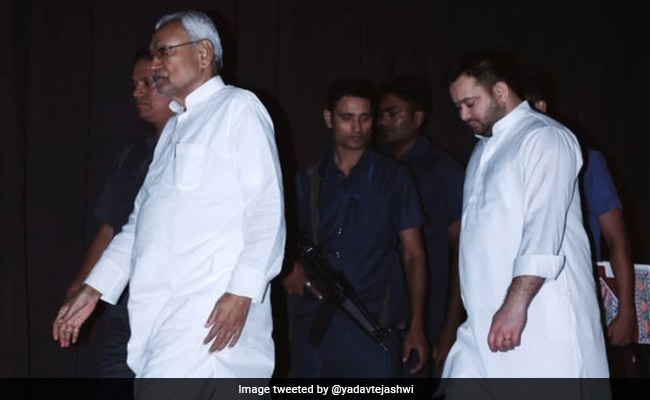 Tejashwi Yadav has been very cautious not to send confusing singals to the voter bases of both parties.

Bihar Agriculture Minister Sudhakar Singh, who has often publicly embarrassed the state government by making accusations of corruption in his department, yesterday resigned from his cabinet post without even a formal announcement. Tejashwi Yadav, who used to counsel him against putting his own government in the dock, finally lost patience with the defiant Mr Singh and made up his mind to drop him from the cabinet. He conveyed his decision to his father, RJD patriarch Lalu Prasad Yadav, who gave his nod and left it to Sudhakar Singh's father and state party President Jagada Nand Singh to communicate it to his son.

The Agriculture Ministry has now been given to Tourism Minister Kumar Sarvjeet. Tejashwi Yadav will hold the additional charge of the Tourism Ministry.

Jagada Nand Singh claimed his son resigned over 'injustice' to the farmers of the state.

"India is no different from the farmers. Gandhi and Shastri understood this, and everyone should understand this. Fortunately, the agriculture minister (Sudhakar Singh) not only understood this but sacrificed for them," he said.

"Someone needs to stand up for the farmers and the injustice being done to them. The Agricultural Minister took this up," he added.

Stirring a controversy, last month, Sudhakar Singh told a gathering in his constituency that his department was infested with "thieves" and he felt like a "chief of thieves". He later said to the media that he stood by what he had said.

"There is not a single wing of our (agriculture) department that does not commit acts of theft. As I am the in-charge of the department, I become their Sardar. There are many other chieftains above me too. The government has changed, but the working style remained the same. Everything is the same as before," he had said.

Tejashwi Yadav also snubbed Jagada Nand Singh, who had made some controversial political remarks about Nitish Kumar's future, by first giving a sound bite and then ensuring elder Singh issued a moratorium on any such statements in the future.

Veteran RJD leader Jagada Nand Singh served as minister in the earlier RJD governments under Lalu Yadav and wife Rabri Devi for fifteen years. He was a close aide of both Lalu Yadav and his son, which was a crucial factor behind the induction of Sudhakar Singh, who despite being a first time legislator got a major department like agriculture. This when junior Singh has even been embroiled in a rice scam, with the opposition BJP gunning for him since just after cabinet formation.

Since Sudhakar Singh was Tejashwi Yadav's choice, everyone rejected the demand for his ouster. However, Mr Singh went after Nitish Kumar, saying nothing good happened in the last 17 years of Mr Kumar's government.

Tejashwi Yadav also reportedly took issue with Jagada Nand Singh's remarks last Thursday where he said that Nitish Kumar should make way for junior Yadav next year, and focus on the 2024 parliamentary polls. An annoyed Tejashwi Yadav said it was unnecessary, and all senior leaders should refrain from making any such statements. The very next day, a statement was issued, signed by Jagada Nand Singh, prohibiting any such statements in the future.

Tejashwi Yadav is mindful of the fact that the BJP machinery is working overtime to spread the message among Nitish Kumar's core Economically Backward Classes (EBC) voters that RJD is in a hurry to crown Tejashwi Yadav, and can stab Mr Kumar in the back at any time.

BJP is also aware of the fact that despite the claims of Union Home Minister Amit Shah, the fact remains that the arithmetic of votes of the Mahagathbandhan and the renewed chemistry between Nitish Kumar and Tejashwi Yadav makes the coalition nearly invincible in the state.