Giriraj Singh, who represents Begusarai Lok Sabha seat in the state, told journalists these were his "personal opinion" on burning issues of the day, in the presence of many party colleagues. 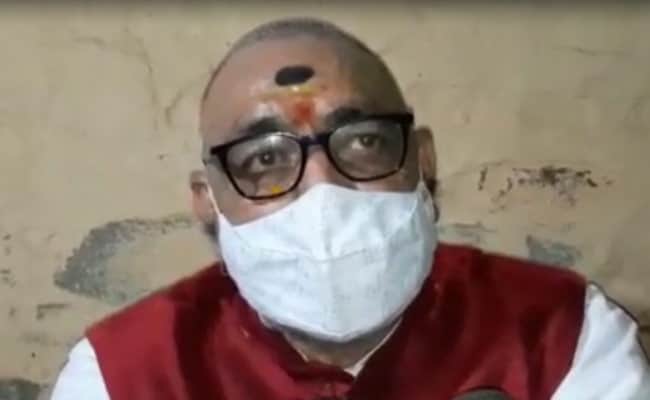 Giriraj Singh said there is need for a strong anti-conversion law. (FILE)

Union Minister Giriraj Singh Wednesday said the proposed caste census in Bihar must exclude infiltrators like Bangladeshis and Rohingyas, who are not acknowledged to be so because of “politics of appeasement”.

The BJP leader, who was in Katihar to take part in BJP's state executive meeting, said there is need for a strong anti-conversion law, dropping the use of the term 'minorities' and erasing all “symbols of oppression by foreign invaders” like the Gyanvapi mosque, a religious structure in Varanasi.

Mr Singh, who represents Begusarai Lok Sabha seat in the state, told journalists these were his “personal opinion” on burning issues of the day, in the presence of many party colleagues.

The union minister said he fully supported of the state government's move for a caste survey despite the Centre's refusal to conduct one.

He was speaking a few hours ahead of an all-party meeting to be chaired by Chief Minister Nitish Kumar which would set in motion the state-specific survey of castes.

Nonetheless, he added “Muslims, who take advantage of reservations for backward classes, must also be covered in the exercise”.

He cited a petition filed in the 1990s to claim that population of illegal immigrants in 11 Bihar districts was about four lakhs back then and underscored the need for not including them in the exercise, which could grant legitimacy to the “infiltrators, who are not called by the name because of politics of appeasement”.

“Be they Bangladeshis, Rohingyas (from Myanmar) or any other type of illegal residents, they must be kept out”, said Mr Singh.

Known for his hard line Hindutva stance, the union minister also stressed the need for a “strong anti-conversion law”.

He said there is need for redefining the term minorities and even doing away with it in the light of the Narendra Modi government's motto of 'Sabka saath sabka vikas'.

“Even (Mehmood) Madani has said he does not belong to a minority group”, Singh said referring tongue in cheek to the Deoband cleric's recent averment that Muslims should consider themselves to be in "majority" taking into account all “like-minded” people.

Asked about his take on the Gyanvapi controversy and leak of video footage of a survey conducted at the premises and the Places of Worship Act of 1991, which is being resented by those demanding “restoration” of a temple at the mosque site, he said the matter is sub-judice and he cannot comment on such a matter.

"Nonetheless, in my view POW Act is not applicable to Gyanvapi. We must also understand why Muslims are so worked up over the leak of the video footage”, he remarked.

“Had Sardar Patel lived longer and Rajendra Prasad been the president, this matter would have been settled. But Nehru put obstructions for his politics of appeasement. It was unnecessary. After all, the country was partitioned in the name of religion," Mr Singh added.