Another Stage Collapses In Bihar, Takes Down Pappu Yadav This Time

Bihar Assembly Polls 2020: A string of stage collapses has taken place in the run up to elections in the state. 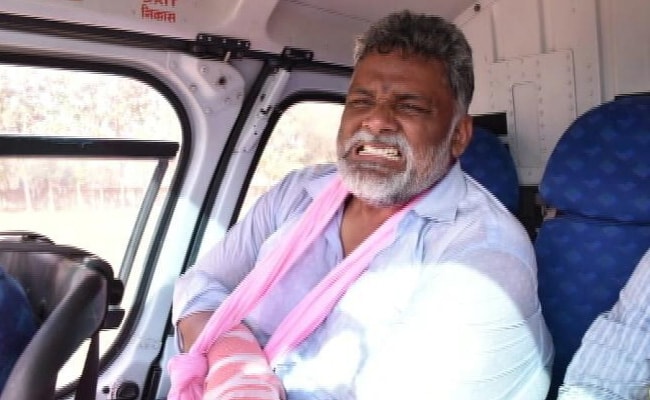 Bihar Assembly Election 2020: Overcrowding seems to be the main reason for so many stages collapsing.

Yet another stage meant for a poll campaign rally collapsed today in Bihar apparently due to overcrowding, taking down with it Jan Adhikar Party-Loktantrik leader Rajesh Ranjan, beter known as Pappu Yadav.

Initial reports said several people, including Mr Yadav himself, sustained injuries in the incident that took place at Muzaffarnagar's Minapur assembly constituency. Photographs showed the politician nursing his right arm after the accident.

This marked at least the fourth such case of a platform built up for a poll rally giving way due to the sheer weight of people on stage.

A video of the incident showed the stage collapsing just as the 53-year-old Mr Yadav was speaking to his supporters through the microphone.

Mr Yadav's party is in alliance with Chandrashekhar Azad's Azad Samaj Party, Social Democratic Party of India (SDPI), and some other smaller parties.

Similarly, on October 29, Congress candidate Mashkoor Ahmad Usmani was thrown off the stage when it collapsed while he was addressing a rally in Darbhanga. Later in the day, at another Congress rally in Champaran a stage collapsed and took down with it party leaders Imran Pratapgarhi and Akhilesh Singh, along with several party workers who were on the dais.