In a major setback for the RJD, three party MLAs - Chandrika Rai, Faraz Fatmi and Jaivardhan Yadav - joined the ruling JD(U) in Patna on Thursday. 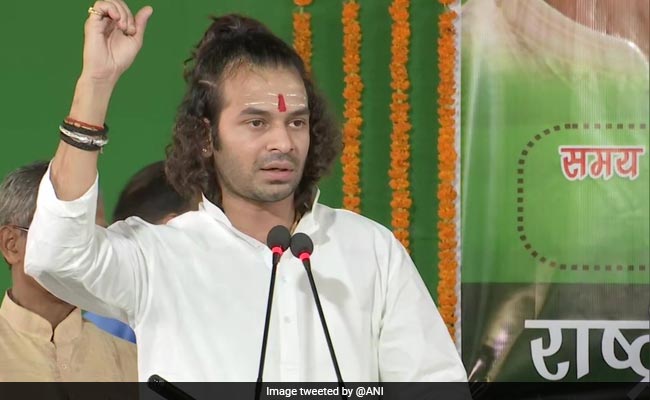 Chandrika Rai has "no status and no existence", Tej Pratap Yadav said (File)

RJD leader and former Bihar minister Tej Pratap Yadav today reacted to the news of his estranged father-in-law Chandrika Rai joining rival JD(U) ahead of the Assembly elections in the state and said that Chief Minister Nitish Kumar's party "will not gain anything" if Mr Rai joins the party.

"JD(U) won't gain anything from Chandrika Rai joining their party. In fact, many JD(U) MLAs are in touch with us and we will share the news of them joining RJD within 4-5 days," Tej Pratap Yadav, the eldest son of RJD supremo Lalu Prasad Yadav, said while speaking to reporters.

Hitting out at Chandrika Rai, the father of his estranged wife Aishwarya Rai, Tej Pratap said, "He has no status and no existence, how come he will affect the RJD. People do not love him, they love Laluji," adding, "People from all sections of the society are with us."

On being asked whether his estranged wife, with whom he is embroiled in a marital dispute, will contest the election, he said, "Whoever wants to fight the polls can do so. Our matter is in court right now. I have all the evidence. I respect women, else even I have video clips to show."

In a major setback for the RJD, three party MLAs - Chandrika Rai, Faraz Fatmi and Jaivardhan Yadav - joined the ruling JD(U) in Patna on Thursday.

Mr Rai had spent many years with the RJD. Faraz Fatmi is the son of Ali Ashraf Fatmi - the former Union Minister of State in the Ministry of Human Resource Development - who joined JD(U) last year in July.

The Bihar Assembly Election is due in October-November this year.