Nitish Kumar Not A Factor In Bihar Polls, Real Fight Between RJD And BJP: Tejashwi Yadav

Tejashwi Yadav said that the Bihar Chief Minister would not speak on the issues of unemployment and poverty which are afflicting the state. 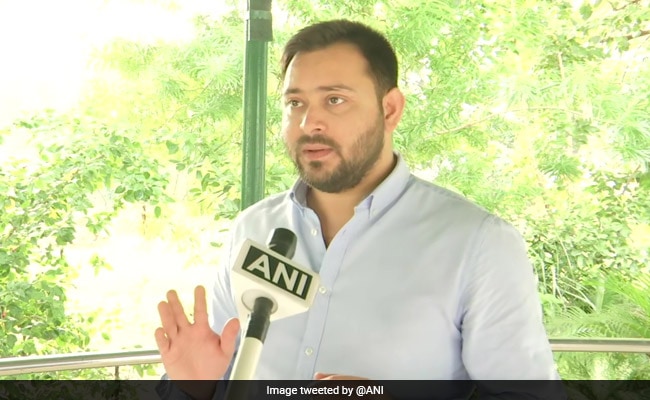 "Nitish Kumar was not able to establish industries in Bihar," says Tejashwi Yadav

With Bihar Assembly polls likely soon, Rashtriya Janata Dal (RJD) leader Tejashwi Yadav on Monday said that there is no public base of Chief Minister Nitish Kumar in the State and the real fight is between his party RJD and Bharatiya Janata Party (BJP).

"In Bihar, there is no public base of Nitish Kumar. He cannot fight on his own in Bihar. In 1995 when there was the Samata Party, they were limited to only 7 seats. In 2014, when JD(U) fought on its own, they won only 2 seats. Nitish Kumar is not a factor in Bihar. There is a direct fight between RJD and BJP," Mr Yadav told ANI.

The RJD leader further said that the Bihar Chief Minister would only speak on stale issues in the virtual rally today and will not speak on the issues of unemployment and poverty which are afflicting the state.

"Today there is a virtual rally of Nitish Kumar. On March 1, we had seen the actual rally of the Bihar Chief Minister. It was deemed as a super flop rally even after the Chief Minister deployed the governmental machinery for the rally," Mr Yadav claimed.

"I want to say that Bihar is a state of youth and we want to ask a few questions to Nitish Kumar. Why has the Bihar Chief Minister not been able to stop migration, malnutrition and unemployment in the state even after being in power for 15 years in the State? He was not able to establish industries in the State," he added.

"52 per cent of the people of Bihar live in poverty. there is 46.6 per cent unemployment in Bihar. In the NITI Aayog, on all parameters, Bihar lies at the bottom. According to NCRB, Bihar has the highest crime figures. The people of Bihar want answers on these issues but Nitish Kumar would only speak on old matters which have no relevance for today," the RJD leader claimed.

On the matter of perceived differences within NDA between LJP's Chirag Paswan and BJP, Mr Yadav said that it is the internal matter of NDA and his focus is on addressing the core issues of poverty and unemployment. He refrained from commenting on the possible alliance between RJD and LJP in the future.

Bihar has 243 Assembly constituencies and elections in the State are due in October-November as the tenure of the current Assembly is scheduled to end on November 29.

The Election Commission has not yet taken a final call on poll dates in Bihar due to the coronavirus pandemic and has sought suggestions from political parties.