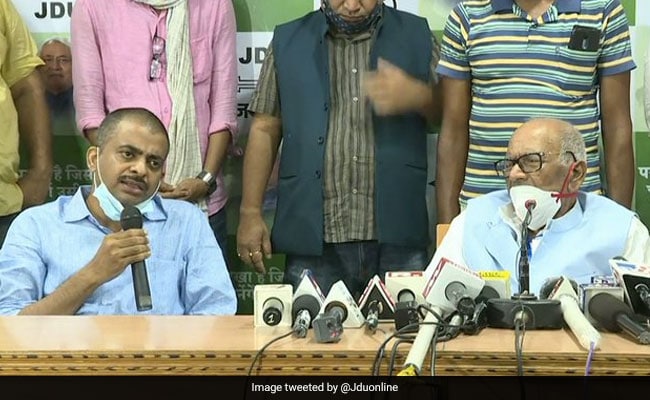 His joining comes a day after RJD gave nomination to Rama Singh's wife from Mahnar assembly seat in Vaishali district.

Before his death on September 13, Raghuvansh Singh had strongly protested induction of Rama Singh, the muscleman- politician who had defeated him from Vaishali Lok Sabha constituency in 2014 on the LJP ticket.

The veteran socialist leader and a close companion of the RJD supremo had quit from the RJD vice president post in protest against efforts to enrol Rama Singh into the party.

But, demise of Raghuvansh Singh, paved the way for Rama Singh's entry into the RJD with his wife getting nomination in the assembly polls.

Peeved at the approach of the RJD leadership in the absence of Lalu Prasad, who is in Ranchi jail following conviction in four cases of multi-crore rupees fodder scam, the former union minister had sent a letter to the RJD supremo from ICU of AIIMS Delhi, where he was admitted then, announcing his decision to quit the party.

Lalu Prasad had rejected the resignation and sent a return letter to his close associate that things would be sorted out after he gets well and had made a sentimental appeal that he was not going anywhere.

The very next day of sending his resignation letter, Raghuvansh Singh had sent series of letters to Chief Minister Nitish Kumar seeking amendment in MNREGA scheme and some issues related to development of his native Vaishali district.

Prime Minister Narendra Modi and leaders belonging to all the parties had condoled death of the septuagenarian leader, who is credited with piloting NREGA programme as rural development department minister in the UPA-I.

While paying tribute to the departed leader, PM Modi had asked the Bihar Chief Minister to fulfil veterans last wishes.

Without wasting time, Mr Kumar's government had approved a few schemes related to irrigation in Vaishali as wished by the socialist leader.

While, giving membership to Raghuvansh Singh's son, Basistha Singh hoped he would carry forward his father's unfulfilled works as a member of the JD(U).

Speaking on the occasion, Satya Prakash Singh, who recently left his corporate job, told media persons he has come into politics to complete the works left by his father.

He said his father subscribed to the socialists views that there should not be more than one member of a family in politics.

"Socialist leader Karpoori Thakur practiced it during his lifetime and so is my father," Satya Prakash Singh said.

He took a dig at family members of Mr Prasad for not taking kindly his father's protest over non-inclusion of the issue of reservation for poor among the upper castes in the RJD manifesto for 2019 elections and also inducting bad elements into the party.

While the JD(U) and the BJP flayed RJD's over giving nomination to Rama Singh's wife forgetting party's founding members reservation on it, Lalu Prasad's party spokesman Mrityunjay Tiwari said there was nothing wrong in giving ticket to a person having "winning potential."