The PM said votes are being polled in Bihar not on the basis of caste, but for development. 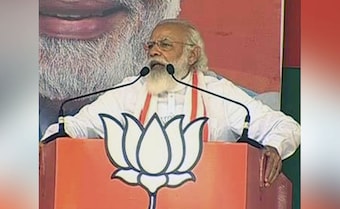 PM Modi said he is "confident about Bihar's development" (File)

Ahead of the third and final phase of polling in Bihar on Saturday, Prime Minister Narendra Modi has written an open letter to the people of the state, telling them he needs the Nitish Kumar government for the development of Bihar.

"I need Nitish Kumar's government in Bihar to ensure that the state's development is not derailed and that it doesn't fall short," PM Modi wrote in his four-page letter in Hindi.

The PM said votes are being polled in Bihar not on the basis of caste, but for development. "Votes are being cast not for false promises but for strong (political) will/intentions. Not for bad governance, but for good governance. Not for corruption, but for honesty. Not for opportunism, but for self-dependence. I am convinced of Bihar's development," the letter, which was tweeted by the PM's Twitter account, read.

The power of a "double engine government" - a reference to the ruling JDU-BJP coalition in the state - will help Bihar reach new heights of development this decade, the PM said.

The PM, completely focusing on the development of the state in the letter, said it is only the NDA which can provide better infrastructure, rule of law imperative for social and economic prosperity in Bihar.

"NDA has done work in all sectors in Bihar -- electricity, water, roads, health, education and for law and order," the letter said.

"The people of Bihar are eagerly waiting for the "Swamitva Yojana". These strong measures will empower the common man and help them lead a dignified life," he added.

The letter came minutes before the campaigning for the final phase of polling ended today. Bihar will vote in the third phase on Saturday, covering 78 constituencies spread across 19 north Bihar districts.

The PM has addressed 12 rallies for the elections, results for which will be declared on Tuesday.

Nitish Kumar, who is seeking a fourth straight term as chief minister, today declared that this will be his last election.