Sharad Pawar's comments echoed those by the Congress, which has alleged the sudden move indicates a "conspiracy" by the BJP, which was in power at the time 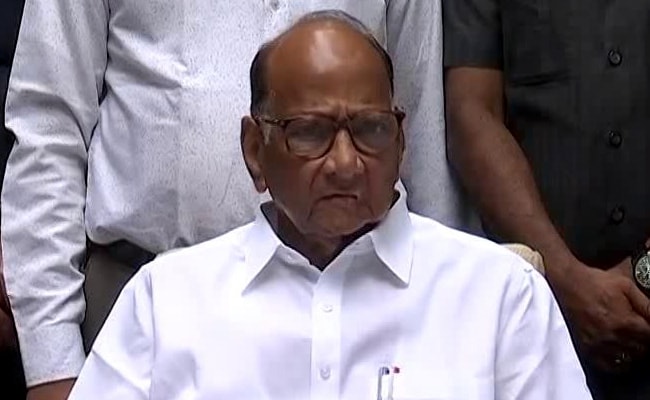 NCP chief Sharad Pawar has claimed the centre's decision to transfer the probe into the Koregaon-Bhima violence to the NIA was motivated by fears that a fresh investigation could expose wrongdoings by the BJP-led government that was in power at the time. Speaking to reporters in Mumbai today, Mr Pawar pointed out the case had been transferred days after he wrote to Chief Minister Uddhav Thackeray to ask for a probe by a special investigation team (SIT). He also hit out against the labelling of people who spoke out against social injustice as "urban Naxals".

"Deputy Chief Minister (NCP leader Ajit Pawar) and Home Minister (Anil Deshmukh) called for a meeting of police officials to know factual position. But within four-five hours of that the centre handed over probe to its agency," Mr Pawar claimed.

Sharad Pawar admitted the central government had rights to transfer the case under the NIA Act, but pointed out that law and order was a state subject.

He also questioned the "hurry" in which the NIA had been called in.

"It shows there is substance in allegation some officials misused powers to arrest people, including innocent ones," he said, adding, "I think this (fresh probe by the state) would have exposed (the earlier government) and to avoid that this has been done. I think the government fears it may be exposed. So the decision has been taken (to transfer the case to NIA)".

The NIA took over the case yesterday, a day after the Maharashtra government held a review meeting with senior Pune police officers to take a call on pursuing the matter.

Sharad Pawar's comments echoed those by the Congress, which has alleged the sudden move indicates a "conspiracy" by the BJP, which was in power at the time.

"Anyone who opposes the MOSH agenda of hate is an 'Urban Naxal'. Bhima-Koregaon is a symbol of resistance that the government's NIA stooges can never erase," Mr Gandhi said in a tweet.

Anyone who opposes the MOSH agenda of hate is an “Urban Naxal”.

The transfer of the probe to the NIA has sparked yet another face-off between the BJP-led centre and Chief Minister Uddhav Thackeray's government, which had indicated it would withdraw all cases against activists and intellectuals accused of inciting clashes.

Koregaon-Bhima violence broke out on January 1, 2018 in Maharashtra's Pune district

Earlier this month Maharashtra Home Minister and senior NCP leader Anil Deshmukh summoned senior Pune police officials to Mumbai for a review of all aspects of the case.

"I have sought a detailed report on the status of the Koregaon Bhima violence; its investigation and aftermath," Mr Deshmukh told reporters.

He also told reporters, earlier this week, the current government - a non-BJP alliance of the Shiv Sena, the NCP and the Congress - believed in democracy and the right of everyone to express opinions.

The BJP's Devendra Fadnavis, who was Chief Minister at the time of the clashes, has welcomed the NIA's involvement and claimed it will "expose the urban Naxals".

"It is correct decision because this case isn't confined to Maharashtra... it is spread all over the country. The centre has taken the right step. This will expose the urban Naxals," he told news agency ANI.

The BJP's Devendra Fadnavis, who was Chief Minister at the time of the clashes, has welcomed the NIA's involvement

"When UPA was in power, a UPA minister said in Lok Sabha that these are urban Naxal organisations but today they are trying to protect these people. This is extremely wrong," he added.

The case involved violence that broke out near the Koregaon-Bhima War Memorial in Pune district on January 1, 2018. Pune Police claimed the violence was incited by speeches at an event called Elgar Parishad held the day before.

The cops also claimed the event had been organised by Maoists and later arrested nine Left-leaning activists, including Telugu poet Varavara Rao and activist Sudha Bharadwaj.