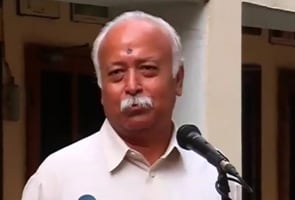 New Delhi: Rashtriya Swayamsevak Sangh (RSS) chief Mohan Bhagwat lashed out at the Congress for giving a terror tag to his outfit alleging this was part of a conspiracy against it and asserted there was no place for radicals in the organisation.

Trashing allegations of RSS' links to terror attacks following Swami Aseemanand's reported confession, Bhagwat also said those accused in various blasts are in no way connected to the organisation.

Responding to Bhagwat's remarks, Congress spokesperson Manish Tiwari said "rather than the rats deserting the ship it seems to be a case of the ship deserting the rats."

"The majority of the people whom the government has accused (in various blast cases), few had left voluntarily and few were told by the Sangh that this extremism will not work here so you go away," Bhagwat told a public meeting last night.

He also hit out at the Congress-led UPA for allegedly maligning the Sangh's image.

"The vote banks that were built are getting disintegrated, results of some elections have not gone in their favour a very serious picture is emerging before the people in the country. They are afraid and have got united to malign our image," the RSS supremo said.

Bhagwat, who is in Surat on a four-day visit to attend the Uttarayan festival organised by the some RSS members, was responding to the recent allegations of Sangh's links with Mecca Masjid, Ajmer, Samjhauhta Express and Malegaon blasts after Aseemanand's confession.

The allegations of the Sangh's terror links, he said, was part of a conspiracy against the organisation and its members.

"Fingers are being pointed at nationalists while, those who are working against the nation are being sheltered," Bhagwat said.

About Aseemanand's reported confession, Bhagwat said, "Earlier investigations in Samjhauta blast case revealed involvement of terrorists, now another statement has appeared. So what is the truth?"

"There is a game to gain power by causing a rift among people. To terrorise people, a new label - Saffron Terrorism - has been floated by some politicians to brand people linked to RSS as trouble makers," Bhagwat said.

He said that RSS was not founded to suppress any community, but to unite all communities.

"But now the Sangh is being portrayed as evil by linking it with those who have left the organisation," Bhagwat said.

On Hindutva, he said, "Extremism is not Hindutva. Hindutva is all-inclusive and it is our identity".

RSS had recently sent a legal notice to the CBI, accusing it of "deliberately leaking" to the media the reported confession of right-wing activist Swami Aseemanand, an accused in 2007 Samjhauta Express blast.

Aseemanand, had reportedly confessed that he and several Sangh activists among others had a direct role in Malegaon, Samjhauta Express, Ajmer and Mecca Masjid blasts.
Comments
RSS chiefMohan BhagwatBhagwat hits out at CongressRight-wingHindu extremism