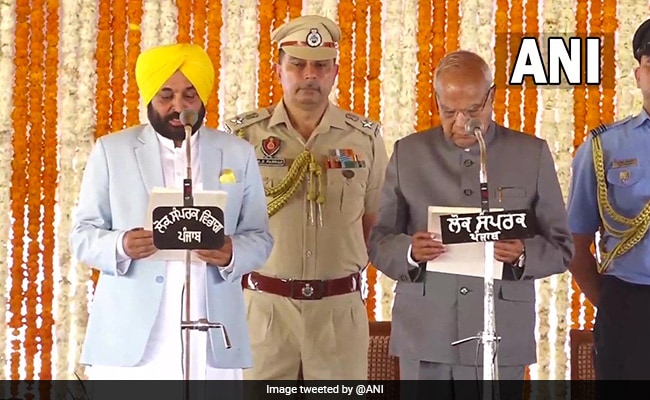 Bhagwant Mann won from the Dhuri assembly seat in the Punjab elections.

The AAP registered a landslide victory in recently concluded Punjab Assembly polls, winning 92 seats, pushing most of its rivals to the margins. Congress won 18 seats in the 117-member Assembly.

Bhagwant Mann, who was contesting from Dhuri Assembly constituency in Sangrur district, won by a margin of 58,206 votes over Congress' Dalvir Singh Goldy.

Here are the Highlights on Bhagwant Mann's Swearing-in Ceremony:

Congratulations to Shri @BhagwantMann Ji on taking oath as Punjab CM. Will work together for the growth of Punjab and welfare of the state's people.

Mar 16, 2022 12:36 (IST)
Around 10,000 security personnel deployed for ceremony
Elaborate security arrangements have been made and nearly 10,000 security personnel are in the village.
Mar 16, 2022 12:33 (IST)
Bhagwant Mann's oath taking ceremony themed 'Rang De Basanti'
Yellow turbans, the trademark of comic-turned-politician Bhagwant Mann, filled the village Khatkar Kalan in response to his call to people to wear "Basanti turbans and dupattas" to his oath. Yellow was the theme of the venue and decor.
Mar 16, 2022 12:24 (IST)
Bhagwant Mann to shortly take oath as the Chief Minister of Punjab in a mega event
Mar 16, 2022 12:10 (IST)
AAP's ideology is special. I pray that God gives them courage to make Punjab prosperous, says singer Gurdas Maan
Mar 16, 2022 11:58 (IST)
Congress leader Manish Tewari congratulates Bhagwant ahead of his oath-taking ceremony

I congratulate @BhagwantMann on being sworn in as Chief Minister
I thank him for inviting me to his swearing in .
Due to Parliament being in session I will not be able to make it .
It is ironic I was not invited to @CHARANJITCHANNI 's swearing in though he was one of my MLA's pic.twitter.com/AyW91uNyYE

Mar 16, 2022 11:46 (IST)
Punjab-CM elect Bhagwant Mann started his career as a comedian
Born in Satoj village of Sangrur in 1973, Mann started his career as a comedian. He began his political career in 2011 with the Manpreet Singh Badal led Punjab People's Party. In 2012, he unsuccessfully contested the elections from the Lehragaga constituency.
Later, he joined the AAP in 2014 and successfully contested the election from the Sangrur Lok Sabha seat. His importance in Punjab politics grew when he defeated the veteran leader of Punjab Sukhdev Singh Dhindsa, who was then with the Shiromani Akali Dal (SAD).
Mar 16, 2022 11:07 (IST)
MK Stalin wishes Chief Minister-elect Bhagant Mann

My hearty wishes to Thiru. @BhagwantMann, who is swearing in as Chief Minister of Punjab today. Tamil Nadu & Punjab share a long history of being vocal about linguistic rights & rights of the state in the Indian Union. Wishing the new government in Punjab, a successful tenure.

Today marks an important day in the history of Punjab as 3 crore Punjabis will together be sworn in as Chief Minister along with @BhagwantMann. Oath to change this corrupt system & to fulfill dreams of Shaheed-E-Azam Bhagat Singh & Babasaheb Ambedkar