INS Kalvari, a Scorpene-class submarine described as a "deadly predator", is one of six built by Mazagon Dock Limited in Mumbai as a part of Project-75 of the Indian Navy.

New Delhi: As he commissioned the INS Kalvari into the Navy today, Prime Minister Narendra Modi called it an "excellent example of Make-in-India".

INS Kalvari, a Scorpene-class submarine described as a "deadly predator", is one of six built by Mazagon Dock Limited in Mumbai as a part of Project-75 of the Indian Navy.

"Kalvari" is named after the tiger shark, a deep sea predator of the Indian Ocean; officials say the name reflects the submarine's agility, strength and predatory prowess.

INS Kalvari is the first conventional submarine to be inducted into the Navy after more than 17 years, even as the navy's submarine arm celebrates it golden jubilee in 2017. 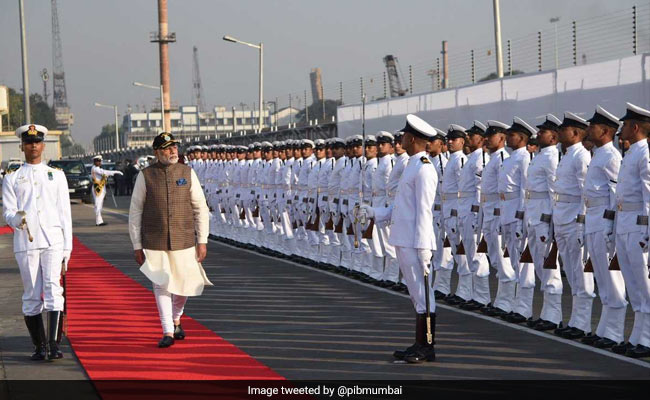 It is a big step in the field of defence, said PM Modi at the commissioning functioning

The very first Indian Navy submarine also bore the name Kalvari and was commissioned in December 1967. The Indian Navy has been operating submarines (including nuclear attack and ballistic missile submarines) for 50 years.

"It is a big step in the field of defence...it will boost the Navy's might," PM Modi said, speaking at the commissioning function that also featured Defence Minister Nirmala Sitharaman and Navy chief Admiral Sunil Lanba.

Stressing on the importance of maritime security, he said: "I call it by a special name S. A. G. A. R.- Sagar or Security and Growth for All in the Region."

The Kalvari went through 120 days of extensive sea trials and tests for various equipment, an official earlier said, adding the submarines have been designed by French naval defence and energy company DCNS.

Promoted
Listen to the latest songs, only on JioSaavn.com
The first Kalvari, commissioned in 1967, was also the first submarine of the Indian Navy. It was decommissioned on May 31, 1996 after nearly three decades of service.

India has just about 15 submarines, a mix of Russian-origin Kilo-class vessels and German HDW submarines. China has four times as many.