Bengaluru Violence: Protesters set around two dozen cars on fire and surrounded a Congress MLA's house in the Karnataka capital.

Violence in Bengaluru: Protesters set many vehicles on fire.

Three persons were killed in police firing and 60 policemen were injured after violence broke out in Bengaluru on Tuesday night over an offensive Facebook post allegedly by the relative of a Congress MLA. 110 people have been arrested for violence, stone-throwing and assault on police personnel.

The police used lathi-charge and tear gas, but as they risked being overpowered by the violent crowd, they resorted to firing, the city police chief was quoted as telling Reuters.

The incidents, the police said, took place in the DJ Halli and KG Halli areas in the eastern part of Bengaluru.

"DJ Halli and KG Halli saw violent incidents. To bring this under control, police used lathi charge, tear gas and firing. Police Commissioner went to the spot. Police bandobast is in place. Strict action will be taken against those offenders," the Bengaluru police posted on Twitter. 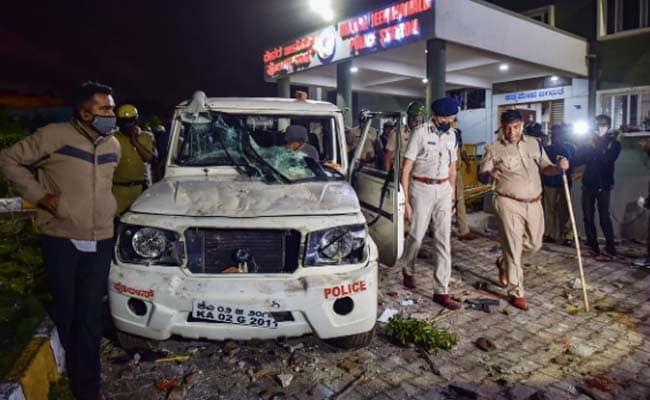 Police personnel stand near a damaged police vehicle in Bengaluru.

Bengaluru police commissioner Kamal Pant said the situation has been brought under control. While a curfew has been imposed in the violence-hit areas of DJ Halli and KG Halli till tomorrow morning, large gatherings have been banned in the rest of Bengaluru city.

At least one journalist was injured after being hit by the police while reporting on the violence.

In tweets this morning, Karnataka Chief Minister BS Yediyurappa condemned the attack and said strict action would be taken against those involved in the violence. 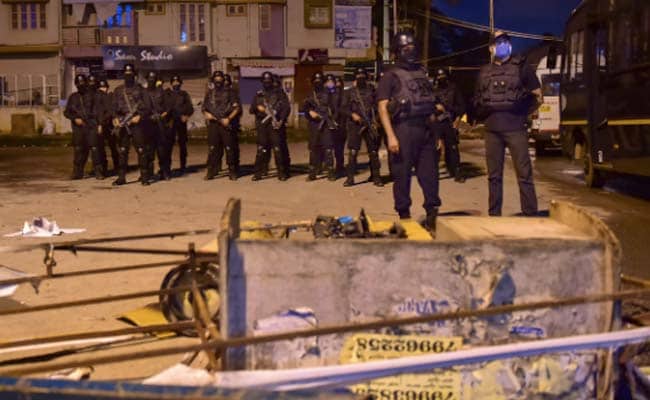 Bengaluru: A special police force team 'Garudu' deployed at the site of violence.

The Congress MLA had released a video late last night appealing to people to maintain peace. Karnataka Home Minister Basavaraj Bommai also released a video message, saying people should not take law into their own hands.

He condemned the incidents of arson and looting and said additional police forces had been sent to the worst-hit areas. The police had been given a free hand to bring the situation under control, he said.

Senior Congress leader Dinesh Gundu Rao appealed people to not to take law into their hands.

"Horrible situation in Pulakeshinagar after the attack on our MLA @AkhandaSrinivas house and the Kaval Byrsandra police station. Whatever the provocation, nobody can take law into their own hands and destroy public property," he said on Twitter.

"I urge all the people to maintain calm and the government to handle this delicate situation firmly but surely and not play politics. I also see a conspiracy in the way the Facebook post has been put out and it looks to have been done to incite disturbance," he said further.