IMA has allegedly cheated a large number of investors after promising them impressive return on their deposits. 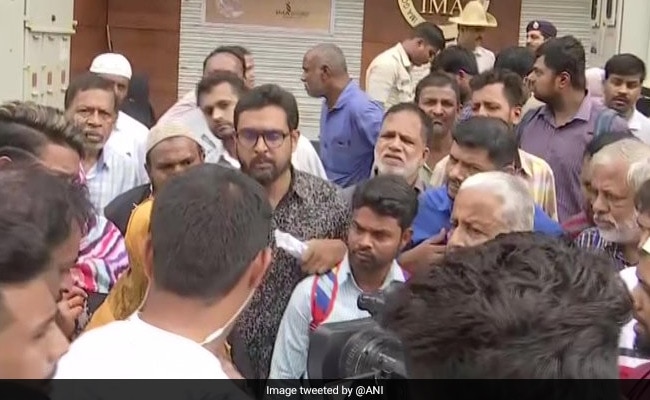 A Special Investigation Team is probing the IMA case.

Special Investigation Team (SIT) on Monday said that a Bengaluru Development Authority engineer was taken into custody and important documents were seized from his possession in connection with the alleged IMA Jewels financial fraud case.

The head of probe team said they searched three Frontline Pharma shops owned by the IMA Jewels in Bengaluru and seized pharmacy and electronic items worth Rs 70 lakh along with Rs 4.4 lakh cash.

"The SIT searched three Frontline Pharma shops owned by IMA and seized pharmacy and electronic items worth Rs 70 lakh along with Rs 4.4 lakh cash. A Bengaluru Development Authority engineer was taken into custody and important documents were recovered from him," he said.

IMA has allegedly cheated a large number of investors, mainly Muslims, after promising them impressive return on their deposits.

IMA founder Mansoor Khan, who is on the run, released a video urging police to arrange his return to India so that he could join the probe.

He disappeared earlier this month after sending an audio clip to some investors threatening to commit suicide due to what he alleged was "harassment" by some politicians and goons.

The SIT had earlier conducted a raid at his office and seized jewellery worth Rs 20 crore. It had arrested the firm's auditor Iqbal Khan and seven directors of different entities linked to Khan.

The Enforcement Directorate (ED) had also issued summons to the IMA founder directing him to appear before the agency on June 24, but he failed to appear as he is believed to be in a foreign country.

Over 25,000 complaints have been filed against the company.