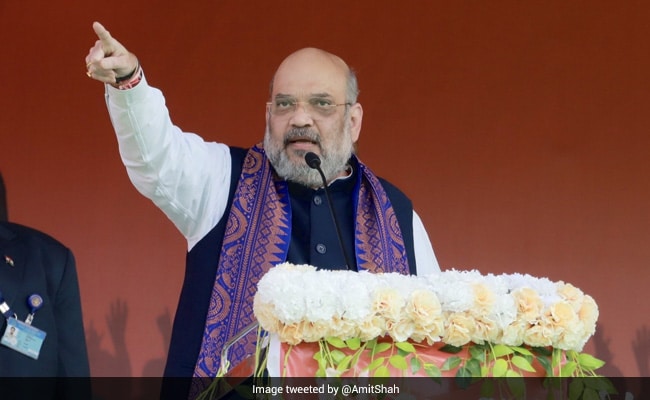 The home minister flagged off the fourth of the five ''Parivartan Yatra'' of the BJP in Coochbehar.

In West Bengal, where the BJP has launched a political war against the Mamata Banerjee government, he raked up the issue of the Trinamool chief's opposition to the Citizenship (Amendment) Act, and asserted the contentious citizenship law will be enforced once the process of COVID-19 vaccination has ended.

Mr Shah's whirlwind tour of West Bengal and Assam was also marked by a social outreach to the numerically strong and restive Koch Ragbongshi and Matua communities whose concerns he sought to assuage.

The upcoming assembly polls, he said, will be a fight between the "Vikas (development) model of the Narendra Modi government and Mamata Banerjee's Vinash (destruction) model".

The home minister, who flagged off the fourth of the five ''Parivartan Yatra'' of the BJP in Coochbehar ahead of the announcement of the assembly elections, said the campaign is not for changing a chief minister, MLA or minister but ending infiltration and transforming West Bengal's condition.

Addressing a rally in the North Bengal town, he said the yatra is also aimed at ending corruption patronised by "Bua-Bhatija" combine. The BJP has been accusing Ms Banerjee and her nephew Abhishek, the Lok Sabha MP from Diamond Harbour, of "institutionalising corruption".

Mr Shah, who met Koch Rajbongshi leader Ananta Roy at his residence in Chirang district of Assam during a private visit, was claimed to have steered clear of the controversial CAA, but once in Bengal, he criticized Ms Banerjee for her opposition to the new citizenship law and over Bangladeshi infiltration.

"This ''Parivartan Yatra'' is not for changing a chief minister, MLA or a minister. It is for ending infiltration, it is for ending violence and building ''Sonar Bangla'', it's for the transformation of Bengal," he said.

"You vote the BJP to power in Bengal. Leave alone illegal immigrants, not even a bird from across the border will be allowed to enter the state," Mr Shah said.

Accusing the opposition parties of misleading the minorities about the Citizenship (amendment) Act, he said, its implementation will not impact the citizenship status of Indian minorities.

Mr Shah said the Modi government had in 2018 promised to bring in a new citizenship law and kept it when the BJP was voted to power again in 2019.

He said, after the country was hit by the COVID-19 pandemic in 2020, its implementation had to be kept in abeyance.

"Mamata didi said we made a false promise. She started opposing the CAA and saying she will never allow it. The BJP always fulfils the promises it makes. We have brought this law and refugees will get citizenship," he said.

"As soon as the COVID-19 vaccination process ends, the process of granting citizenship under CAA will begin. All of you will be respected citizens of this country," he said.

Matuas, originally from East Pakistan, are weaker section Hindus who migrated to India during the Partition and after the creation of Bangladesh. Many of them have been accorded Indian citizenship but a sizeable section of the population has not got it.

The Matua community, with an estimated population of three million in the state, can be a game changer in at least four Lok Sabha seats and more than 30 assembly seats in Nadia, and North and South 24 Parganas districts. It once stood solidly behind the TMC, but had supported the BJP in the 2019 Lok Sabha polls.

West Bengal has a 294-member assembly.

A section of state BJP leadership is apprehensive that the delay and confusion over the implementation of the CAA could make them turn against the saffron party.

Reaching out to the Koch Rajbonshi community in North Bengal's Coochbehar, Mr Shah announced a new ''Narayani Sena Battalion'' in central paramilitary forces and said its training centre will be named after ''veer'' (brave) Chila Roy (a prince and younger brother of King Nara Narayan of Koch Dynasty).

He said a tourist circuit and Thakur Panchanan Memorial Centre will also be set up. Panchanan Burma is an icon of the community.

"Such an environment has been created in Bengal that raising Jai Shri Ram slogan has become a crime. Why does she get angry after hearing Jai Shri Ram? Mamata Didi, if Jai Shri Ram is not chanted here, will it be chanted in Pakistan?" he said.

"You get angry over it because you want to appease a particular section of people for vote bank politics. I am telling you that by the time election ends Mamata didi will also start chanting Jai Shri Ram," he said, mocking Ms Banerjee.

Lashing out at "dynasty politics" in the TMC, Mr Shah alleged that Ms Banerjee has been working only for the welfare of her nephew instead of the masses.

"The Modi government works for ''jan kalyan'' (public welfare), while the Mamata Banerjee dispensation is bothered only about ''bhatija kalyan'' (nephew's welfare). Her only agenda is to make her nephew the chief minister," he said.

Ananta Roy, the chief of Greater Coochbehar Peoples' Association (GCPA), who calls himself a descendant of the erstwhile royal family of Coochbehar, said Mr Shah assured him of a "package" for Koch Rajbongshis after the elections.

Asked if talks were held on the contentious NRC exercise and the CAA, Mr Roy said no such matter was discussed as the Union home ministry has already declared the Koch Rajbongshis as "aboriginals".

"We belong to this land... so how can we be outsiders? Besides, we have been declared aboriginals by the home ministry," he said.

The Koch-Rajbongshis along with five other communities in Assam has long been demanding Scheduled Tribe (ST) status.

"All our pending demands were discussed at the meeting, and now I can only say that good days are ahead for the Koch-Rajbongshi community," Mr Roy said.