Bengal Congress retweeted a tweet of a man whose daughter sketched 'Tryst with Destiny' the speech given by India's first Prime Minister Jawaharlal Nehru. 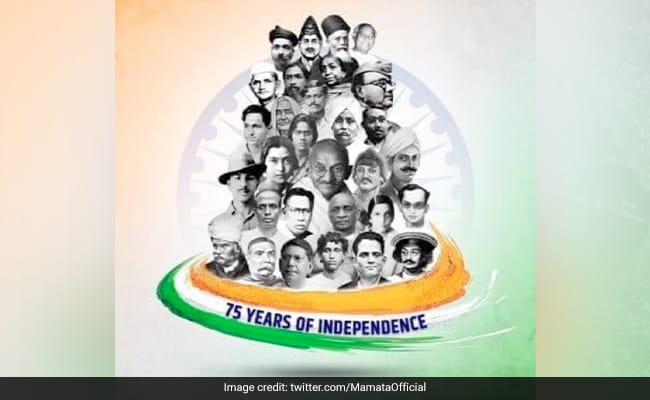 Bengal Congress retweeted a tweet of a man whose daughter sketched 'Tryst with Destiny' the speech given by India's first Prime Minister Jawaharlal Nehru.

"My daughter chose to remind some basic history lesson by drawing the moment of first independence day!", the Twitter user Abhisek Banerjee wrote.

Retweeting the above tweet, the Congress on August 14 tagged the Twitter handles of Mamata Banerjee and the All India Trinamool Congress and wrote: "History lesson for @MamataOfficial @AITCofficial from a kid. Because they purposefully omitted the first Prime Minister Jawaharlal Nehru from their independence day DP to please their political masters."

History lesson for @MamataOfficial@AITCofficial from a kid ! Because they purposefully ommitted the first prime minister #JawaharlalNehru from their independence day DP to please their political masters ! https://t.co/SjLQzMj7Al

"@AITCofficial & @MamataOfficial u can purposefully omit #JawaharlalNehru from ur #IndpendenceDay 2 please ur master @narendramodi but u cant omit him from the history; so my daughter chose to remind some basic history lesson by drawing the moment of first independence day," tweeted a user and thus followed a trail of questions over the West Bengal Chief Minister's choice of display picture.

Siddaramaiah in a series of tweets expressed strong objection to the omission of Jawaharlal Nehru's image in the advertisement. He also demanded an apology from the Karnataka Chief Minister.

"Insulting freedom fighter Jawaharlal Nehru in an advertisement made from common people's taxes is intolerable. The Chief Minister should apologize to the people of the state for insulting Nehru," said Siddaramaiah.

The advertisement with portraits of prominent freedom fighters was given to the media by the state government as part of the 'Har Ghar Tiranga' campaign.

"Not including Pandit Jawaharlal Nehru in the list of freedom fighters in govt ad shows how low a CM can go to save his chair," said the Congress leader.

Siddaramaiah in a series of tweets expressed strong objection to the omission of Jawaharlal Nehru's image in the advertisement.

"Remember that Nehru participated in the freedom struggle and spent nine years of his life in jail. Like your Savarkar, he was not a coward who pleaded (with) British officers to get himself released from jail. RSS is allergic to Nehru who opposed RSS communal politics and banned it after Gandhi's assassination and dedicated his life to maintaining secularism. But, what is wrong with you Mr. Bommai?" Siddaramaiah asked.

"The truth of your family's freedom struggle is that the only person you got to mention in the state government advertisement was Savarkar who begged the British for his release from jail. Why did you drop the picture of RSS founder Hedgewar who was jailed twice (1921 and 1931) for participating in the freedom struggle, Bommai, are they afraid that their true face will be exposed for rejecting the tricolour flag?," the Congress leader asked.

"VD Savarkar was released from jail after pleading forgiveness from the British. But, Baba Saheb, who fought for freedom by being the voice of marginalized sections, gets placed in the last row," he further said speaking about the government advertisement.