Kanhaiya Kumar, one of the most talked about candidates in the national election, filed his nomination in Begusarai on Tuesday. 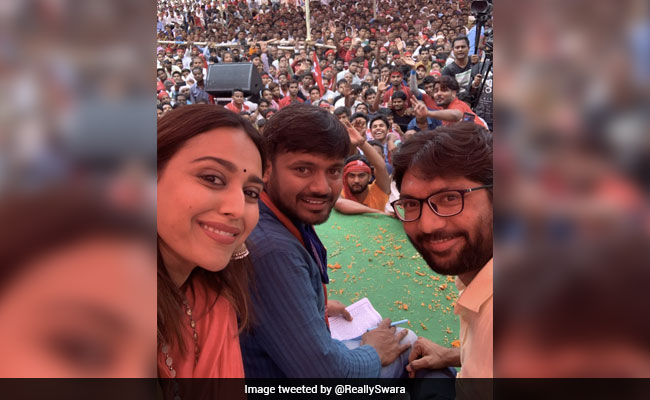 The occasion was Kanhaiya Kumar's nomination rally in Bihar's Begusarai. Actor Swara Bhasker, who was celebrating her 31st birthday on Tuesday, was in the city to support the former Jawaharlal Nehru University students' union leader, who she calls her friend. Ms Bhasker, one of the most vocal critics of the BJP's policies in Bollywood, made a fervent vote appeal for Mr Kumar, invoking the lyrics of a popular Bhojpuri song.

The actor, who graduated from JNU before taking up acting as a career, concluded her short speech with the customary red salute of the communists.

Kanhaiya Kumar, one of the most talked about candidates in the national election, filed his nomination in Begusarai on Tuesday. Flanked by Congress Gujarat lawmaker Jignesh Mevani, Mr Kumar addressed hundreds of his supporters who turned up in his party's colours.

Ms Bhasker today tweeted a video of the public meeting where party workers sang and danced.

Spent my birthday campaigning for the dynamic @kanhaiyakumar in #Begusarai Has been one of the most humbling & exhilarating experiences I've ever had! Indian electoral democracy is a giant to be amazed at! #thoughts#LokSabha2019pic.twitter.com/mpd49qEDc3

In another tweet, she called Mr Mevani and Mr Kumar game changers.

"These two game changers!! We need leaders like @kanhaiyakumar & @jigneshmevani80 In parliament. They are educated, committed, have an inclusive progressive vision, are magnetic leaders and oh boy! They are both rockstar orators! Watch them handle the crowd," she tweeted.

The fiery former JNU student, fighting his first ever public election, faces a formidable opponent in Union Minister Giriraj Singh, who was first reluctant to contest in Begusarai, but later relented.

Mr Kumar appealed to the masses last month for funds for the polls. He received a warm response, with people making generous contributions.

Kanhaiya Kumar was arrested in February 2016 under sedition law, allegedly for doing nothing to prevent the raising of anti-India slogans on the JNU campus.

A Delhi court on Monday adjourned the hearing in the case till July 23, while giving more time to the Delhi Government to decide on the issue of granting sanction for Mr Kumar's prosecution.

Constitution Of India Is Like Modern Version Of 'The Gita': Lok Sabha Speaker