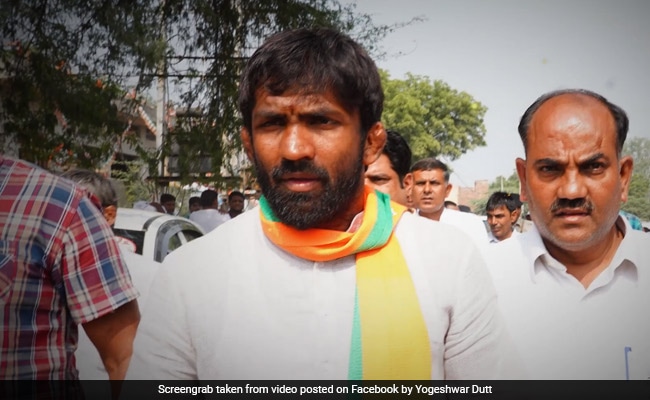 BJP candidate and Olympian wrestler Yogeshwar Dutt is trailing by a margin of 10,330 votes from the Baroda Assembly seat in Haryana after eleven rounds of counting, as per the Election Commission data.

Congress candidate Indu Raj Narwal has continued to maintain a lead over Mr Dutt, his nearest rival, as per initial trends.

After the completion of eleven rounds of counting, Mr Narwal polled 35,301 votes while Dutt got 24,971 votes.

The counting of votes for the bypoll to the Baroda assembly seat began at 8 am on Tuesday. There will be 20 rounds of counting.

Three-tier security has been provided at the counting centre at Mohana in Sonipat, according to officials.

The polling on November 3 for the Baroda assembly seat had recorded an overall turnout of 68.57 per cent, sealing the fate of 14 candidates.

The Baroda assembly seat fell vacant in April following the death of Congress MLA Shri Krishan Hooda, who had won it thrice consecutively in the 2009, 2014 and 2019 assembly polls.

The Baroda bypoll is also a battle of prestige for former chief minister Bhupinder Singh Hooda as this Jat-dominated constituency lies adjacent to his own Garhi-Sampla Kiloi seat in Rohtak and is considered his stronghold.

The bypoll is equally important for the INLD which had slumped to its worst-ever performance in the 2019 assembly polls when the party could win only one out of 90 seats.

Baroda was a reserved seat till 2005 and a pocket borough of the INLD before the Congress won it for three consecutive terms since 2009.

The BJP had won 40 of the 90 assembly seats in 2019 and later formed the government with the JJP's support, which had won 10 seats.

A win in Baroda will take the saffron party's tally to 41 while if Congress wins, its tally will remain unchanged at 31 as the seat was earlier held by it.

The INLD's strength will rise to two if they win the seat.