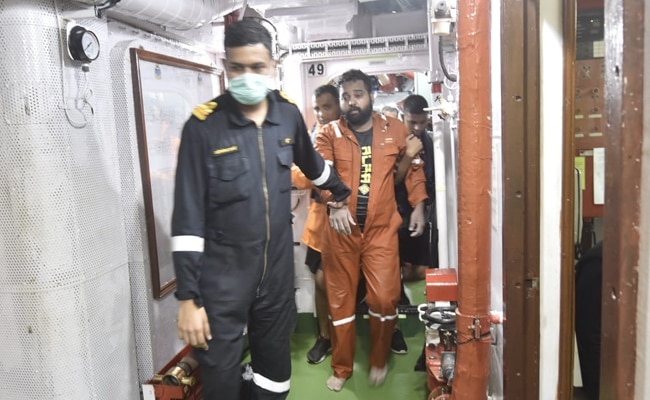 Cyclone Tauktae: Barge P-305 was one of three belonging to engineering company Afcons

So far 186 people have been rescued and 37 bodies recovered from the wreck of barge P-305, which was one of three - the others were Gal Constructor and Support Station-3 - deployed by engineering firm Afcons for its ONGC (Oil and Natural Gas Corporation) contract.

The Navy is leading a massive, round-the-clock rescue effort that includes several of its ships, P-81 reconnaissance aircraft and Sea King helicopters, as well as Coast Guard and ONGC vessels, to detect survivors from the sunken barge and other vessels stranded or affected by the storm.

All 137 people on Gal Constructor, which ran aground during the storm, were rescued Tuesday, the Coast Guard said.

The 201 on board Support-Station 3, which was drifting northwest in the Mumbai High oilfield, are believed to be safe; the barge has been located by INS Talwar and is now being towed back to Mumbai harbour by ONGC support vehicles, according to news agency PTI.

The Directorate General of Shipping has ordered an investigation into the deaths. Mumbai Police has also announced a probe - into barge P-305 remaining in the area despite storm warnings. An ADR (accidental death report) was registered Wednesday in connection with the deaths.

The Nationalist Congress Party (NCP), which is part of the ruling Maha Vikas Aghadi alliance in Maharashtra, has demanded action against those who failed to evacuate the barge in time.

Both ships sailed back out immediately to rejoin rescue efforts, alongside INS Beas, INS Betwa, INS Teg and other vessels.

ONGC's oil driller Sagar Bhushan - which had 101 people on board when it lost its anchors in the storm and began to drift north, has also been located and is being towed home, PTI said. 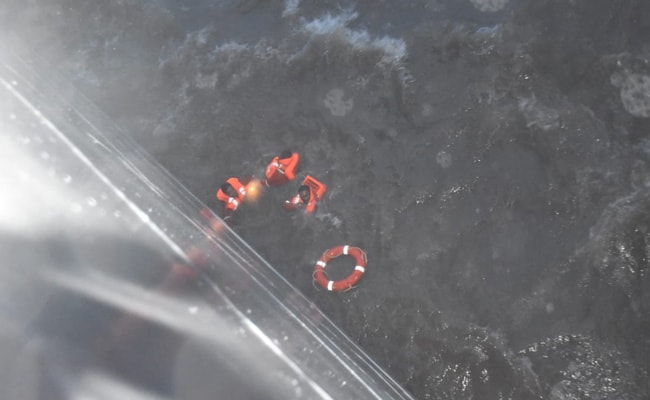 On Thursday morning the Coast Guard said another missing tug - Sangeeta, with a crew of 10 - had been located about 10 nautical miles west of Maharashtra's Tarapur. The Coast Guard found the ship and has provided food, water and medical support to the crew, while it is being towed back.

INS Talwar - the Navy's 'on scene coordinator' off the Gujarat coast - is in the area, officials said. 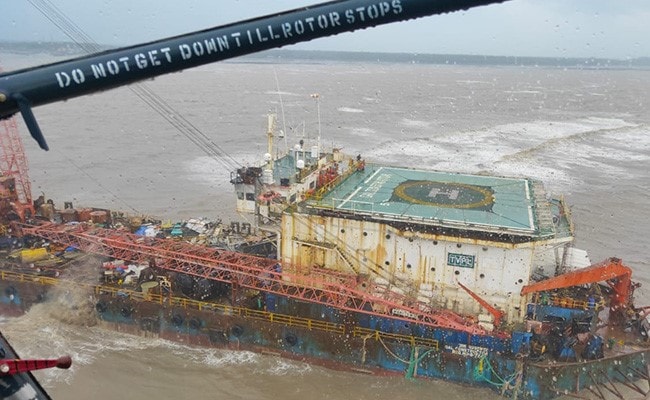 Nightmarish stories are emerging of people battling the elements to stay afloat as the Navy races to find them. Manoj Gite, 19, one of those on board barge P-305, thanked the Navy for saving their lives.

"It is because of the Navy that we all are alive and safe today, otherwise we don't know what would have happened to us," he told PTI, fighting back tears.

The Defence Ministry tweeted a compilation video of the rescue efforts Thursday evening.

"Despite the challenges posed by extreme weather conditions of very harsh sea and cyclonic winds the Navy along with the Coast Guard rose to the occasion and brought succour to the people during Cyclone Tauktae," the ministry tweeted.

Despite the challenges posed by extreme weather conditions of very harsh sea and cyclonic winds the @indiannavy alongwith @IndiaCoastGuard rose to the occasion and brought succour to the people during #CycloneTauktaepic.twitter.com/AtH21oCyXd

Tauktae - the most powerful storm in the Arabian Sea region in decades - laid waste to parts of the western coast as it moved from Kerala to Gujarat, where it made landfall 8.30 pm Monday.

At least three people were killed in Gujarat, six in Maharashtra and eight in Karnataka. Tens of thousands of houses and electricity poles were damaged, as were acres of crops.