At his town hall in New Delhi, Barack Obama as asked about LGBTQ rights in India by a transgender activist Akkai Padmashali.

Akkai Padmashali asked Barack Obama a question on LGBTQ rights at the townhall in India.

New Delhi: In New Delhi for a town hall, former US President Barack Obama today had no dearth of tricky questions to answer. About forty-minutes into the event, a transgender rights activist's wringer about discrimination against the LGBTQ (lesbian, gay, bisexual, and transgender) community put the former US commander-in-chief especially close to the line of fire.

"When the state terror is against minorities - be it transgender, sexual minority, caste, class, creed, religious - when you have been stigmatised, when you've been discriminated and patriarchal power and domination is against you - I am a criminal before Section 377 which criminalises transgender, lesbian, gay, bisexual - how do I then raise my voice?" Akkai Padmashali said.

But Ms Padmashali, a noted voice in the Indian gender rights movement, was not done. The applause from her question had barely receded when she followed it up with the second poser. "Can I hug you?" she said, triggering even more cheers from the crowd. 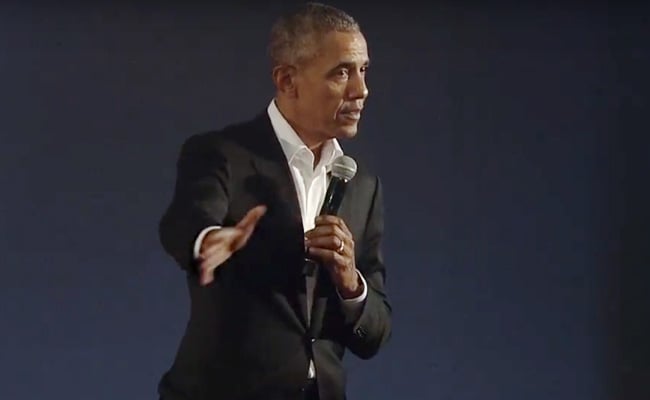 Barack Obama's town hall in New Delhi was an event to interact with young men and women.

A hug was not out of order and could certainly be arranged after the event, Mr Obama said. The former president, however, was much less inclined to comment on the state of Indian law. "I can't speak to the specifics of legislation in India because I'm not qualified, I've not been keeping pace with exactly what's happening in the parliament around these kind of issues," he said.

But he did offer a response to the broader question. "It begins with what you just did, which is to find your voice, and articulate your views, your experiences and tell your story. And that's true of any group that is marginalised, stigmatised," Mr Obama said.

"Finding that voice and being able to tell a story so that the perceptions that somehow you are different are changed... people start recognising their own experiences in you, they see your humanity," he said.

"Once that voice is there, hopefully, others join you," he added. 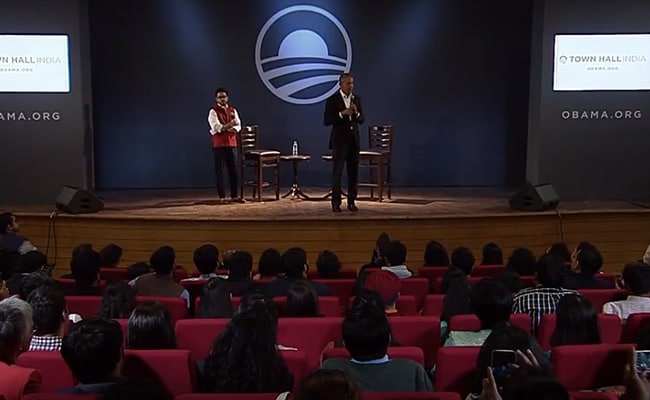 Barack Obama's town hall in New Delhi was organised by the Obama Foundation.

The 44th US President's record on LGBTQ rights has been significant. From being an opponent and undecided on same-sex marriage, Mr Obama went on to become the first president to support it. He also repealed the US military's Don't Ask, Don't Tell rule which banned the service of openly gay troops.

Promoted
Listen to the latest songs, only on JioSaavn.com
But Mr Obama's stand on LGBTQ rights would have few backers in India. The archaic Section 377 of the Indian constitution carries forward a 19th century colonial-era law criminalising sexual acts "against the order of the nature". While it was struck down by the Delhi High Court in 2009, the decision was overturned on appeal by the Supreme Court in 2013, which reasoned that the matter relating to LGBTQ rights and decriminalisation of homosexuality should be left to the legislature.

Since then, an overwhelming number of lawmakers have shot down requests from MPs like Shashi Tharoor to take up the issue.