Back Home, DK Shivakumar Says "Hang Me If I Have Done Wrong"

"If my brother, myself and my family members had gone against the law, I'm ready to accept any punishment... If I have done wrong let them hang me... but I won't remain silent," Mr Shivakumar said. 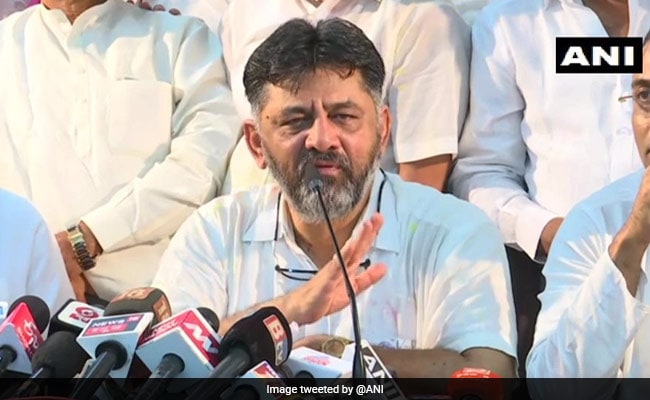 DK Shivakumar said he was "confident", "strong" and would fight for justice. (File)

Senior Congress leader DK Shivakumar, who returned to Bengaluru on Saturday after his release on bail from a Delhi prison in a money laundering case, said he was "confident", "strong" and would fight for justice.

The former minister also claimed that he has not betrayed anyone at any point of time and would come out with facts and documents regarding the case in the days to come. "If my brother, myself and my family members had gone against the law, I'm ready to accept any punishment... If I have done wrong let them hang me... but I won't remain silent," Mr Shivakumar said.

Speaking to reporters, he said, "I won''t go against my conscience.. I don't want to trouble or cheat anyone. I don't need such life. I come from a village."

"There's no question of going back. I will fight. Time and law will give answers. I'm personally confident," he said, adding he and his will power has grown stronger. "I will fight for justice," he added.
Hundreds of Congress workers and supporters of Mr Shivakumar gave him a grand welcome as he landed at the city airport in the afternoon.

The 57-year-old Vokkaliga strongman, who has his own support base in parts of old Mysuru region of Bengaluru Rural, Ramanagara, Mandya and neighboring areas was greeted by supporters with flowers, crackers and a mammoth apple garland upon his arrival.

Mr Shivakumar was brought to KPCC office from the airport in a procession, as he waved and acknowledged supporters from an open car, leading to traffic chaos, to which he apologised later.

Asserting that he has done nothing wrong and all his assets, businesses and that of his family have been declared in his election affidavit, he said, "I have brought everything before the people of the state and country."

"It's being talked about and investigated... In the coming days, will come out with facts and documents. Everything is in the public domain.. I'm agriculturist by birth, business man by profession, educationist by choice and politician by passion," he added.

Mr Shivakumar was arrested by the Enforcement Directorate on September 3 in the money laundering case and walked out of the Tihar Jail in New Delhi on Wednesday evening, after the Delhi High Court granted him a bail.

Noting that he has fulfilled the responsibility that party had given him, he said the party has reposed faith in him and has stood by him, as he recollected with choked voice Congress President Sonia Gandhi visiting him at Tihar jail.

Expressing gratitude to party workers and leaders who visited him, prayed and wished for his release, Mr Shivakumar said, ".. all the people who came from far off to see me in Delhi - their faith shows that I have not erred. If I've done wrong, let god and law punish me."

The Enforcement Directorate had moved the Supreme Court on Friday challenging the Delhi High Court decision granting bail to Mr Shivakumar in a money laundering case.

Referring to ED's appeal in the Supreme Court, saying he was ineligible for bail, the Congress leader said " I don't want to comment on that now. I have also got to know that within a few minutes after permission was sought by CBI for inquiry against me it has been approved. I'm ready to face it."

"All the properties of my mother have been attached by I-T friends. I''m the benamidar. A son is benamidar for his mother," he said.

He said he was worried about his children being ridiculed for their father having gone to jail.
During his stay in the prison, Mr Shivakumar said he referred to various laws to prepare for the future battle.

Karnataka BJP has questioned the mindset of Congress for according a hero's welcome to Mr Shivakumar, released from jail on massive corruption and money laundering charges.

Reacting to Mr Hegde's comments that corrupt people were being honoured instead of being boycotted, Mr Shivakumar said, "I have great respect for him. But I didn't ask anyone to come.
They (supporters) came on their own."

Mr Hegde made the comments while responding to a question by reporters on those released from jail being given a grand welcome.

To a question on campaigning for the December 5 by-polls, Mr Shivakumar said the party president would guide him based on his legal schedule.