Baby Rani Maurya, a former mayor of Agra, was nominated as governor of Uttarakhand on August 21. 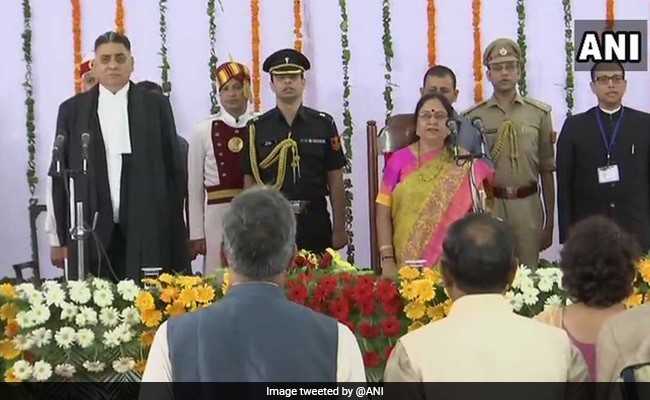 Baby Rani Maurya was sworn as the new governor of Uttarakhand at Raj Bhavan today.

Baby Rani Maurya was sworn in today as the new governor of Uttarakhand.

The oath of office and secrecy was administered to Ms Maurya by the acting Chief Justice of the Uttarakhand High Court Rajiv Sharma at a ceremony held at Raj Bhawan in Dehradun.

The function was attended by Chief Minister Trivendra Singh Rawat, his cabinet colleagues and a host of distinguished people and senior officials.

Ms Maurya, a former mayor of Agra, was nominated as governor of Uttarakhand on August 21. She replaces Krishna Kant Paul whose five-year tenure ended recently.

Ms Maurya was given a guard of honour at the Raj Bhawan lawns immediately after the swearing-in ceremony.

Later talking to reporters the governor expressed her commitment to the development of the state.

Describing Uttarakhand as one of the leading states in the country, she said her efforts would be directed towards contributing to its development.

Women empowerment and protection of the girl child will be the areas of her focus, she said. Ms Maurya also spoke in favour of quality education to children.

Uttarakhand's development should be in sync with Prime Minister Narendra Modi's vision of a new India, she said.