Babulal Marandi returned to the BJP after 14 years in presence of Home Minister Amit Shah on February 17. The BJP made his joining a grant event. 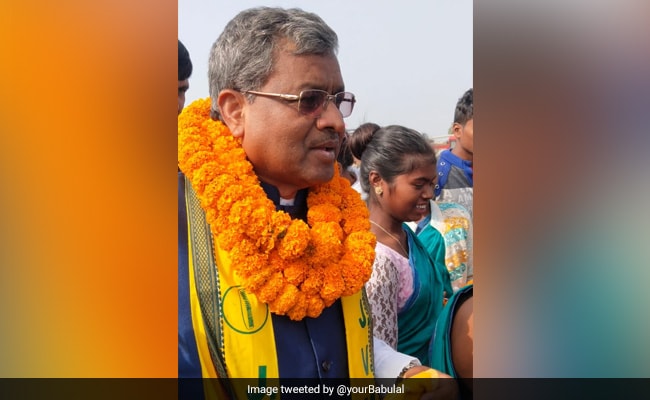 Babulal Marandi returned to the BJP after 14 years in presence of Home Minister Amit Shah on February 17.

Former Jharkhand Chief Minister Babulal Marandi was elected as the Legislative Party leader of the Bharatiya Janata Party (BJP) in Ranchi on Monday.

He was elected unanimously as the leader after BJP Legislator Anant Ojha proposed his name, which was supported by other Legislators of the party. After getting elected to the Legislative party, Babulal Marandi has also become the Leader of Opposition in the Assembly.

"I was struggling outside and so returned home. Your cooperation will be my strength" said Babulal Marandi to the BJP workers after getting elected.

Babulal Marandi returned to the BJP after 14 years in presence of Home Minister Amit Shah on February 17. The BJP made his joining a grant event.

When Jharkhand was carved out from Bihar in 2000, Babulal Marandi became the first Chief Minister of the state. He had a clean image and started a fight against the Maoists.

In retaliation, the Maoists killed his son in 2007 in the Giridih district. Babulal Marandi, during his tenure as the Chief Minister, worked in the transport sector and road network connected to each village of the state.

Babulal Marandi, however, failed to keep the allies together during his rule. The allies revolted against him and forced him to resign in March 2003 leading to the elevation of Arjun Munda as the Chief Minister.

Babulal Marandi quit the BJP just after the fall of the Arjun Munda government in 2006 and later floated the Jharkhand Vikas Morcha-Prajatantrik (JVM-P).

After the poll debacle in the recently concluded Assembly polls, Babulal Marandi merged his party with the BJP.