Azam Khan Skips Samajwadi Party Meeting: Azam Khan, who was recently released from Sitapur Jail, is in Rampur and could not attend the meeting due to health reasons, SP leaders said. 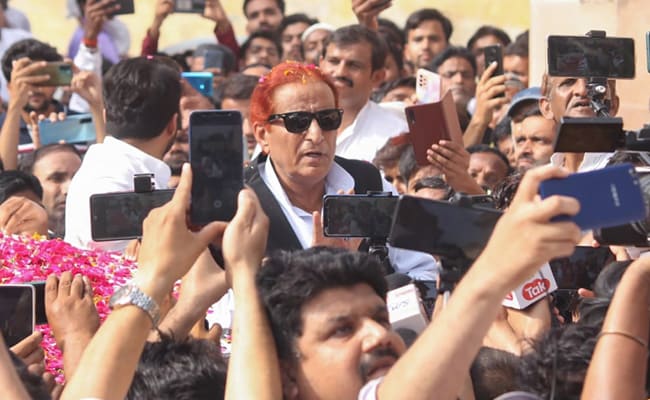 Azam Khan, who was recently released from Sitapur Jail, is in Rampur and could not attend the meeting due to health reasons, SP leaders said.

However, in Rampur, Azam Khan was seen visiting the district jail with his son Abdullah Azam to meet his supporters lodged there in various cases.

Besides Azam Khan, his son Abdullah and Pragatisheel Samajwadi Party Lohia (PSPL) chief, who is an SP MLA from Jaswant Nagar (Etawah), also did not turn up for the meeting at the SP headquarters.

"Both Azam Khan and his son Abdullah will be attending the session tomorrow. Azam will sit on left of Akhilesh Yadav and will raise issues regarding the BJP government," SP MLA Ravidas Mehrotra said, adding that Khan could not attend the meeting due to health reasons.

He said Azam Khan will first take oath and then attend the assembly session on Monday.

Azam Khan had 88 cases, including that of land grabbing, registered against him in Rampur and was released on May 20 from Sitapur Jail after the Supreme Court granted him interim bail in a cheating case.

Azam Khan's media in-charge Fasahat Ali Khan had accused Akhilesh Yadav of ignoring his colleague while he was in jail and also the Muslim community, sparking speculations about a rift in the party.

Fasahat Ali Khan had alleged that Akhilesh Yadav met Azam Khan only once in the jail and the party made no attempt for his release in the past two-and-a-half years.

Rumours about Azam Khan's unhappiness with the Samajwadi Party leadership were bolstered when he did not meet Ravidas Mehrotra in jail, but a day later, met Congress leader Pramod Krishnam there.

About absence of Shivpal Yadav, Ravidas Mehrotra said, "Though he won on the SP election symbol (bicycle), he is head of a party. Earlier also he had not attended a meeting." At the meeting, Akhilesh Yadav gave advise to party legislators and asked them to raise issues of public interest.