The hurried announcement on the Ram statue is expected to blunt the barbs aimed at the BJP by right-wing groups at the Dharm Sabha in Ayodhya today.

Chief Minister Yogi Adityanath has approved the Ram statue, which will be made of bronze.

Hours before a massive push for the Ayodhya temple could mobilise resentment against the alleged delay on the part of the ruling BJP, the Uttar Pradesh government on Saturday night raced to announce key details of the Ram statue it plans to build on the banks of the Sarayu river. The statue is expected to measure 221 metres - topping even the famed Statue of Unity in Gujarat.

A press release from the Uttar Pradesh government stated that Chief Minister Yogi Adityanath has approved the statue, which will be made of bronze. The figure of Lord Ram itself will measure 151 metres, the pedestal 50 metres, and the "chattra" over his head 20 metres. A representational photograph of the statue was also shared with the media.

Despite this, the government did not divulge other important aspects of the statue, such as its possible location or costs. The release refrained from disclosing the source of the funding too. 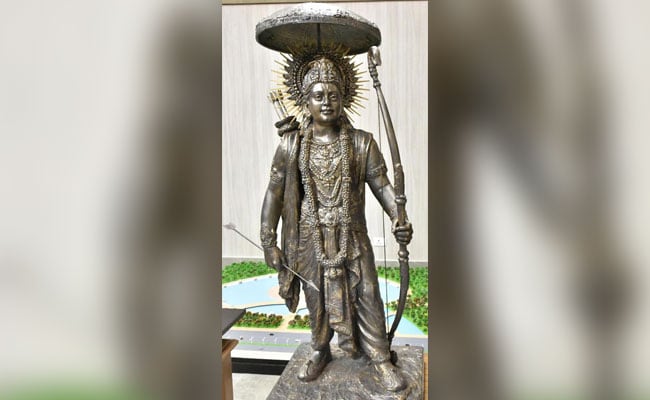 The representational photograph of the Ram Statue.

The hurried announcement on the statue is expected to blunt the barbs aimed at the BJP by right-wing groups at the Dharm Sabha in Ayodhya today. Many of them, including the Vishwa Hindu Parishad and the Shiv Sena, want the Narendra Modi government to introduce a legislation or ordinance for the construction of the Ram temple in Ayodhya.

The Vishwa Hindu Parishad had last month said that it was waging the "final battle for the temple", and set the end of this year as the deadline for the BJP-led central government to bring an ordinance in Parliament. The event, expected to be attended by two lakh people, has created tensions in Ayodhya with Muslim residents expressing fears of violence and former Chief Minister Akhilesh Yadav suggesting that the Supreme Court call in the army.

Shiv Sena chief Uddhav Thackeray, who arrived at Ayodhya on Saturday with thousands of followers, was more critical in his observations. In his address, he likened the BJP government to the mythological villain Kumbhakarn for dragging its feet on the age-old promise, and demanded a concrete date by which the temple construction would begin. Mr Thackeray has insinuated in the past that the Ram temple is just an election issue for the BJP.

At 182 metres, the Statue of Unity -- made in the image of freedom fighter Sardar Vallabhbhai Patel -- is currently the world's tallest statue. It was built at a cost of Rs 2,989 crore on a river island facing the Sardar Sarovar Dam.