The Vishwa Hindu Parishad or VHP warned that if the BJP government did not meet its demand then "all options were open". 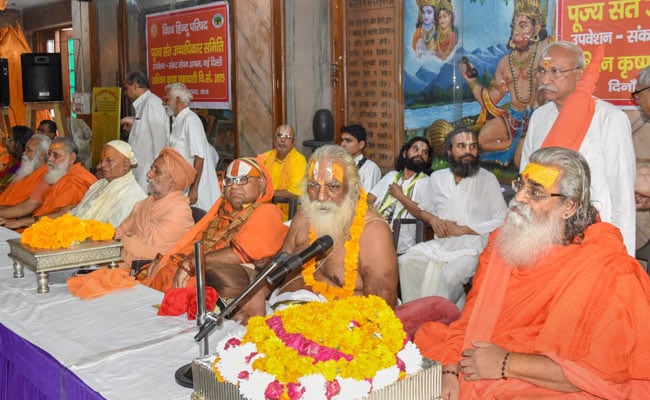 The Vishwa Hindu Parishad or VHP held a event in New Delhi.

The Vishwa Hindu Parishad on Friday said it was fighting a "final battle" for a Ram temple in Uttar Pradesh's Ayodhya and set a "deadline" for the BJP-led central government to bring an ordinance for it in parliament by the end of the year.

At a day-long meeting in Delhi, a VHP committee passed a resolution, demanding the construction of "a grand Ram temple" at the disputed site in Ayodhya, Uttar Pradesh that is also claimed by Muslims for a 16th-century mosque that was razed by Hindu activists in 1992.

After the meeting, a VHP delegation also met President Ram Nath Kovind and gave a copy of the resolution to him, while requesting him to ask the government to fulfil their demand.

Addressing a press conference, VHP's international working president Alok Kumar set the "deadline" for the government to bring the ordinance in parliament by the year-end.

Describing the Narendra Modi government as one of "Ram bhakts", the VHP leader expressed the hope that it would acknowledge the feelings of crores of Hindus in the country and bring the law "before the sunset of 2018".

"If that does not happen, then all the options are open before us. The future course of action will be decided during the two-day 'Dharam Sansad' to be held next year on the sidelines of the Maha Kumbh in Allahabad," Mr Kumar said.

A Supreme Court decision last week had ensured that the case of whether or not to build a Ram temple at the site in Ayodhya will be heard from October 29. A three-judge bench led by former Chief Justice of India Dipak Misra refused to revisit a 1994 ruling that the government can acquire land that a mosque is built on - a decision that means that the politically-charged temple-mosque dispute can be taken up without any delay.