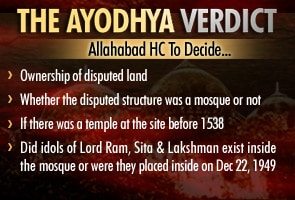 New Delhi: The verdict in the Ram Janambhoomi-Babri Masjid dispute will decide whether the 2.7 acres of disputed land on which the Babri Masjid stood before it was demolished on December 6, 1992, belongs to the Sunni Central Waqf Board or to the Akhil Bharat Hindu Mahasabha.

The Ayodhya dispute at a glance:


There are four title suits that ask the court to decide on:


There was communal tension when an idol of Lord Ram was found inside in December 1949, and the government confiscated the site. That is when the lawsuits began.


* In December 1992, thousands of kar sevaks, led by BJP and RSS leaders, demolished the Babri Masjid.