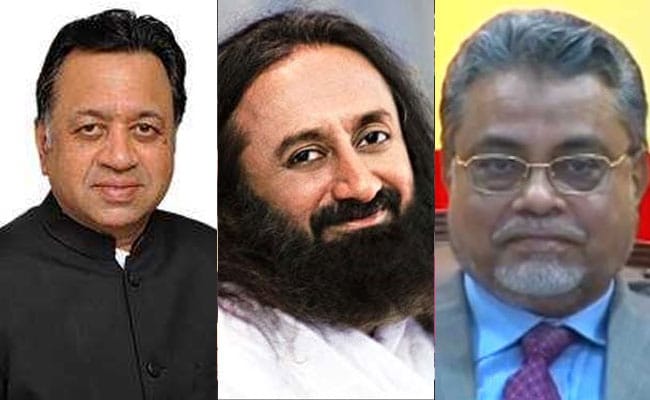 The Supreme Court today ordered mediation to settle the Ram Janmabhoomi-Babri Masjid dispute by a three-member panel including spiritual guru Sri Sri Ravi Shankar, Justice (Retd) FM Kalifulla and senior advocate Sriram Panchu. The panel has been given eight weeks by the Supreme Court to arrive at a conclusion. It has to give a status report at the end of four weeks. The three members have the liberty to get more people on board if they want or get any legal help, said the top court.

"I understand the Supreme Court has appointed a mediation committee headed by me. I'm yet to receive the order copy. I can say if a committee has been constituted we'll make every effort to resolve the issue amicably," Justice Kalifulla told reporters after the top court's order.

Sri Sri Ravi Shankar, 62,  is a spiritual guru, who has been leading a worldwide movement for a violence-free society. Sri Sri had been advocating constructive dialogue between the opposing parties on Ram Mandir issue.

Sri Sri took to Twitter and said, "Respecting everyone, turning dreams to reality, ending long-standing conflicts happily and maintaining harmony in society - we must all move together towards these goals."

Sriram Panchu, 69, is a senior advocate and mediator. Founder of The Mediation Chambers - India's first court-annexed mediation centre in 2005 - he played a key role in making mediation a part of India's legal system. After being appointed as a mediator, Mr Panchu said, "It is a very serious responsibility given to me by the Hon'ble Supreme Court. I will do my best."

Mr Panchu has written several books on mediation. The top court had referred to him as an "eminent trainer" and "one of the foremost mediators in the country".