"Don't harm TMC (Trinamool Congress) party members. A case would be filed against you if you do so," Kalasona Mondal said at a rally in Birbhum. 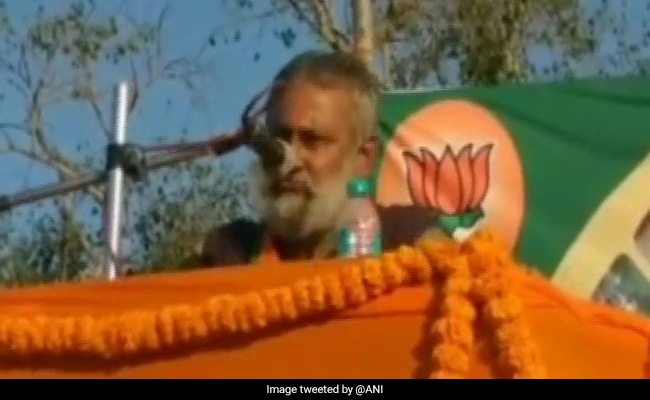 BJP leader Kalasona Mondal was addressing a rally in Birbhum.

A day after the BJP's West Bengal chief's comments about Mamata Banerjee becoming the prime minister, another BJP leader said the ruling Trinamool Congress is not the opponent of the people. In a provocative speech, Kalasona Mondal told locals in Bhirbhum district that nothing will happen if the police forces are harmed.

"Don't harm TMC (Trinamool Congress) party members. A case would be filed against you if you do so. The TMC isn't your opponent, the police is. Instead of harming TMC workers, if you harm police, nothing will happen. The police are very corrupt. It never saves its friends," Kalosona Mondal said on Sunday at a rally in Birbhum, around 180 km from Kolkata.

Last month, Bengal BJP chief Dilip Ghosh threatened the police of "stripping" them of their uniforms if the party comes to power, accusing policemen of filing false complaints against BJP workers. Taking on the state police force, he had said the police personnel were "not worthy" of their uniforms.

"When the situation gets worse, we strip you of your uniforms. You're not worthy of the uniform, hence we will take it off," Mr Ghosh had said at a rally in Birbhum.

On Saturday, when asked if anyone from the BJP's West Bengal unit had the chance to be the prime minister, Mr Ghosh said Mamata Banerjee was ahead in the race.

"We can surely have one from Bengal after her. But she has the first chance. We couldn't have Jyoti Basu as the first Bengali prime minister as his party did not allow him to be," he had said. "We want her to be fit so that she can work well. She needs to remain fit because if there is any Bengali who has the chance to be the PM from this Bengal, then she is the one".

Mr Ghosh backtracked on Sunday and said "there was no such possibility" and that his remark should be "taken in good humour".

Dilip Ghosh's statement had shocked the Bengal BJP, engaged in a bitter tussle with Ms Banerjee's party. According to state BJP sources, Mr Ghosh's comment did not gone down well among the party cadres especially at a time when the party is trying hard to emerge as the main challenger to the Trinamool in the state.