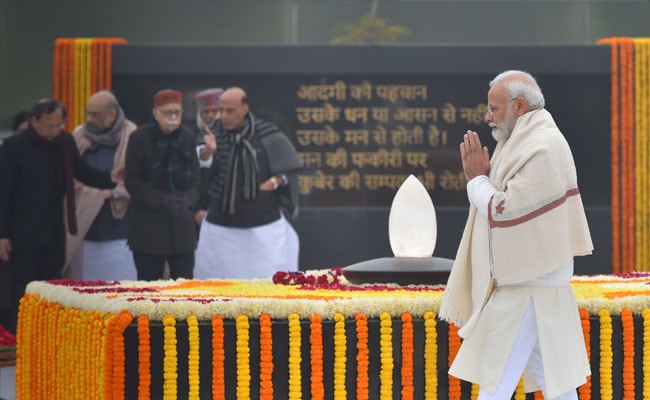 Prime Minister Narendra Modi in his tribute to former prime minister Atal Bihari Vajpayee on his 95th birth anniversary said the three-time PM's "silence held more power than his words". "Many good things can be said about the life of Atal ji... He knew when to speak and when to stay silent. That's amazing power," PM Modi said in a minute-long montage on Mr Vajpayee that he tweeted this morning.

The first few seconds of the montage shows black and white and sepia photos of a smiling Mr Vajpayee as PM Modi's voiceover plays in the background. More photos follow, showing PM Modi sitting beside Mr Vajpayee at different times. In one photo, PM Modi is seen holding putting his forehead on Mr Vajpayee hands to receive him at a political event.

President Ram Nath Kovind and PM Modi along with other leaders also paid tribute to Mr Vajpayee at Atal Samadhi Sthal in central Delhi this morning. Defence Minister Rajnath Singh and Home Minister Amit Shah were among those who placed flowers as a mark of tribute.

Mr Vajpayee was known for his oratory skills, which was on display when he defended the nuclear tests in Pokhran in 1998. "It is surprising that people are criticising the nuclear tests. When in 1974 then prime minister Indira Gandhi had carried out the tests, we welcomed it even while we were in the opposition. Was there any threat to the nation at the time," he said in parliament.

Born on December 25, 1924, he went on to join the Rashtriya Swayamsevak Sangh, the BJP's ideological mentor, in 1939.

The Modi government is working on several public welfare schemes named after the former prime minister. The Union Cabinet has approved the Atal Bhujal Yojana, a Rs 6,000 crore scheme to improve groundwater management. The government will also name a strategic tunnel under Rohtang Pass after him.

Kerala Will Decide On Reopening Places Of Worship Around June 8