PM Modi is in Qingdao on a two-day visit to attend the annual summit of the Shanghai Cooperation Organisation (SCO). 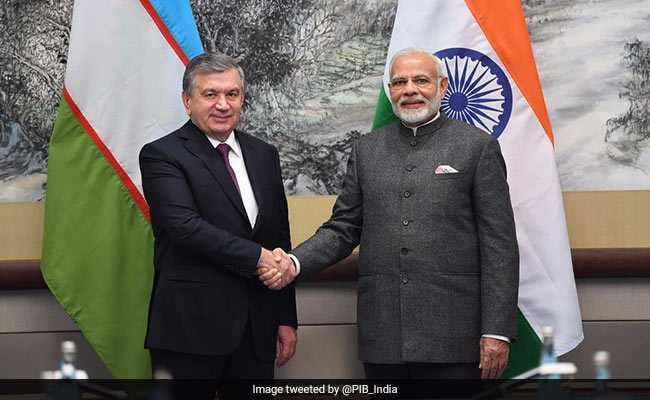 PM Modi met with Uzbekistan President on the sidelines of the Shanghai Cooperation Summit.

PM Modi arrived in the picturesque coastal city of Qingdao on a two-day visit to attend the annual summit of the Shanghai Cooperation Organisation (SCO).

"Wonderful to meet Mr Shavkat Mirziyoyev, the President of Uzbekistan. Ties between our nations have their roots in history," PM Modi said in a tweet.

"We reviewed the full range of the India-Uzbekistan friendship, especially ways to boost economic and cultural cooperation," he said.

It is for the first time that an Indian prime minister is attending the SCO summit after India along with Pakistan became full members of the grouping, jointly dominated by China and Russia, which has been increasingly seen as a counter to NATO.

"Prime Minister Narendra Modi met Shavkat Mirziyoyev President of the Republic of Uzbekistan on the sidelines of SCO Summit. The two leaders exchanged views on a range of topics to further strengthen our strategic partnership," Ministry of External Affairs spokesperson Raveesh Kumar said in a tweet.

PM Modi is expected to hold about six bilateral meetings with leaders of other SCO countries.

The SCO leaders are also expected to review the situation in the Korean peninsula, Afghanistan and Syria.

The SCO was founded at a summit in Shanghai in 2001 by the presidents of Russia, China, Kyrgyz Republic, Kazakhstan, Tajikistan and Uzbekistan. India and Pakistan became its members last year.
Comments
Shanghai Cooperation OrganisationSCO summitNarendra Modi