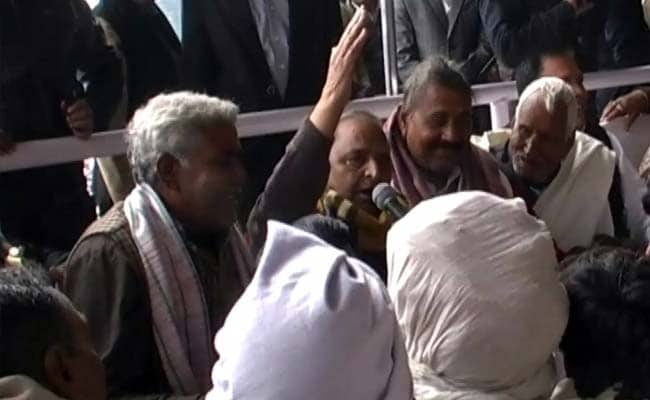 Lucknow: The Saifai Mahotsav, the annual festival in Samajwadi Party chief Mulayam Singh Yadav's village, started on a low key this year. But it witnessed something that earlier festivals did not - a folk song performance by Mr Yadav himself.

The former chief minister, who had dabbled in wrestling in his younger days, also happens to harbour a love for folk songs. Today, during a folk song performance by locals, he broke into a song that celebrates the friendship between Lord Krishna and the cowherd Sudama.

Calling villages the real India, Mr Yadav later said, "What I sang today is a real song from the real India. I sang of friendship. There is no one more important in life than friends."
Last year, the festival had come under fire from Samajwadi Party's political opponents for its lavishness. While Bollywood actors including Madhuri Dixit, Alia Bhatt, Varun Dhawan and Salman Khan had been called in to perform, the money spent had raised eyebrows across the board.

The timing of the festival - held soon after the Muzaffarnagar riots - also raised the hackles of the critics.

Promoted
Listen to the latest songs, only on JioSaavn.com
Mr Yadav had defended it, saying, "Some people criticise this, saying there are songs and dances. But is entertainment allowed only for a few people? Our farmers never get a chance to see this."

Still, this year's programme remained low key. While there is a buzz that actor Hrithik Roshan will perform on the final night, activities like wrestling, folk dances and a cricket competition in the village have so far been the main fare.