Ashish Chaturvedi (center) is one of the four key whiste-blowers of the Vyapam scam.

Gwalior: Despite more than 10 alleged threats and attempts to kill him - including a recent warning that he would be "cut into pieces" - Ashish Chaturvedi says he will not budge from his mission: "Even if I die as a result, I want to name the big fish - starting with Chief Minister Shivraj Singh Chouhan."

Mr Chaturvedi, 26, an activist, is one of four key whistle-blowers in what is known as the Vyapam scam, which has escalated into a national controversy with the deaths of 35 people linked to the scandal.

Recently, a court ordered that Mr Chaturvedi be protected for life by the Madhya Pradesh police. "I will be the next mysterious death," he said to NDTV in his neighbourhood in Gwalior, describing the security given to him as a farce. Earlier, he had to ride pillion on a cycle with the policeman assigned to him. Today, a portly cop tries to keep up as they bicycle through congested lanes. 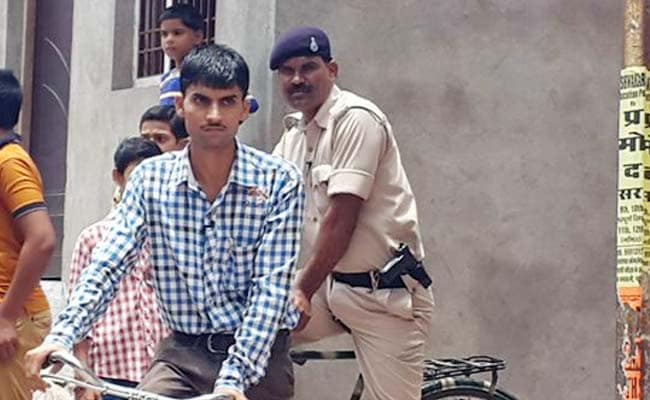 In 2013, reports emerged that bribes were being paid in Madhya Pradesh to top politicians and bureaucrats in exchange for allowing proxy candidates to take qualifying exams for government jobs and colleges. The scam is being investigated by the Madhya Pradesh police under the supervision of the High Court. The 35 deaths that have racked up point to a dark, ruthless cover-up, the opposition Congress says, demanding that the CBI take over the inquiry.

Mr Chaturvedi says his own investigation began in 2009, when his mother needed treatment for cancer. The doctors they encountered seemed grossly lacking in basic training and knowledge. Tip-offs about doctors with fake degrees accrued quickly. In 2013, his evidence led to a police case that blew the lid off an underbelly seething with connections, he says, to both the ruling BJP and the Congress.

"When I met an official to disclose important information," he says, "they told me this whole well is laced with bhaang (intoxicant)...drink from it and you too will enjoy the high."
Comments
Vyapam scamShivraj Singh ChouhanMadhya PradeshVyapam deathsAshish Chaturvedi