PM Modi will inaugurate the first phase of the Mahakaleshwar Temple Corridor project on October 11. 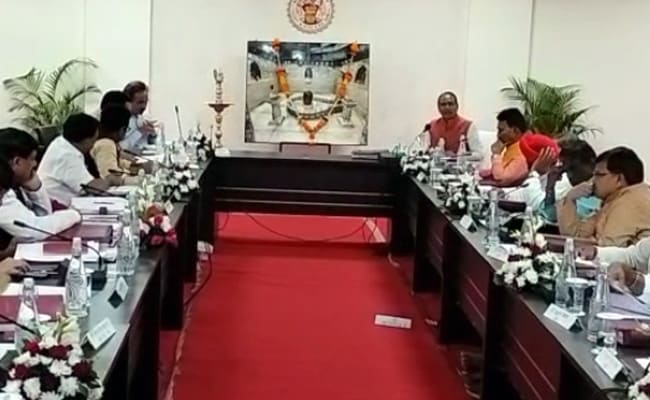 Mahakaal, a reincarnation of Lord Shiva, is traditionally believed to be the king of Ujjain.

Ahead of Prime Minister Narendra Modi's visit to Ujjain, Madhya Pradesh chief minister Shivraj Singh Chouhan chaired a cabinet meeting on Tuesday with a portrait of the 'Mahakaal' deity taking the centre stage.

'Mahakaal', a reincarnation of Lord Shiva, is traditionally believed to be the king of Ujjain.

PM Modi will inaugurate the first phase of the Mahakaleshwar Temple Corridor project on October 11. The 900-metre corridor will have around 200 statues and murals related to Shiva, Shakti and other religious entities.

This was the first time that a state cabinet meeting was held in Ujjain, which is home to the famous temple dedicated to Lord Shiva.

In the first phase of the project, work worth Rs 351 crore has been completed. Another Rs 310.22 crore will be spent in the second phase.

The state cabinet also decided to name the complex as 'Mahakal Lok'.

Chief minister Chouhan said October 11 will be a local holiday in Ujjain.

Mr Chouhan claimed at the meeting that the BJP government had invited the tender for the project before the 2018 state assembly elections, but it could not materialise because of a change in government in December that year when the Congress came to power.