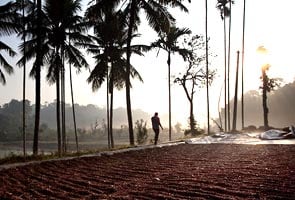 Coorg: Like many mornings, this one started with a cup of coffee.

But while our group of four had traveled far to get to this quiet, mountainside veranda in the southwestern Indian state of Karnataka -- my wife, Katy, and I from Mumbai, our friends Franklin and Sarah all the way from the United States -- our coffee had not.

Our perch was at the center of an old, but still active, coffee plantation, owned by Prasad Poovanna, and the beans that went into the brew we were sipping had been harvested directly from his estate. They had made the short trip to the nearby town of Virajpet, where they were roasted and ground, before being carted back to their source and brewed for our cups.

Savoring the earthy, deeply flavored blend, we watched mists drift across the plantation and the verdant, wooded hills of Coorg beyond. (While the official title of the region has reverted to its original name, Kodagu, the Anglicized version is still widely in use.) For decades, the area has been home to such plantations; now, as they begin to welcome visitors, they are drawing attention for the very hospitality that we were enjoying.

The area was not always so friendly to outsiders. Long ago, before the British began planting coffee here in the 19th century, neighbors feared the military prowess of the Kodavas, the original inhabitants of the region. The thick forests were also home to wild animals, deadly insects and feisty blood-sucking leeches. A lengthy monsoon, which can extend up to six months every year, compounded the menace.

When India gained independence in 1947, the original British planters sold their estates to Kodavas and other South Indians. While the Indian planters initially flourished, the liberalization of the coffee market in the 1990s ushered in an era of greater economic volatility. In recent years, as a strategy for countering the unreliable price of the commodity, these planters have added lodging facilities to their estates.

"It also gives additional income to the women and provides more work during the lean period," said Suresh Chengappa, proprietor of the homestay Honey Valley, referring to the workers who hand-pick coffee beans in his fields. He and his wife, Susheela, first opened their estate to guests in 1994 after a virus eroded their income from beekeeping, which they still pursue to a lesser degree, along with coffee growing.

Mr. Chengappa and other plantation owners are not relying solely on tourists for income: coffee remains a key resource in the region, and Coorg produces more coffee -- both arabica and robusta, the two main varieties of beans grown for consumption -- than anywhere else in India.

Each plantation takes a different approach to brewing coffee. At Mr. Poovanna's Palace Estate, which opened to guests in 2004, the house coffee comes entirely from robusta beans, yielding a bold, almost smoky cup (which, with its depth of flavor, shattered my prejudices against robusta, generally regarded as the lower-quality bean). At Honey Valley, Mr. Chengappa serves a blend of the two varieties, aiming to balance the body of the robusta with the more delicate flavors of the arabica.

Still, most of the beans ship elsewhere in South India and the world. (According to Mr. Poovanna, the Italian espresso giant Illy is now purchasing arabica from Coorg.)

Aside from the coffee's global reputation, the real draw for visitors is the lush vegetation that provides shade for the coffee plants, and the animal life -- birds in particular -- that calls it home. Coorg is part of the Western Ghats, the chain of mountains extending parallel to India's Arabian Sea coast, from Gujarat south to Kerala, an area rich in biodiversity.

During her morning strolls around the edges of the plantation, Katy, armed with her "Pocket Guide to the Birds of the Indian Subcontinent," spotted greater racket-tailed drongos, white-cheeked barbets and Malabar parakeets, among other species.

The plantations also make for terrific jumping-off points for area treks. In the photocopied booklet that he makes available to guests, detailing the day hikes available from Honey Valley, Mr. Chengappa described the daylong trek to the top of Mount Tadiandamol -- at about 5,700 feet, the highest point of Coorg -- as perhaps the most interesting hike in the region, if not all of South India.

"The flora is so vivid -- every few meters you come across a different plant," he explained later.

As described in the booklet, the hike also includes a visit to the ornamentally carved Nalaknad Palace, built in 1791 by Veerarajendra, the embattled ruler of Coorg. The final stretch adds pastures and rice paddies to the already diverse array of landscapes.

After such a ringing endorsement, we could not refuse. So, after our coffee and breakfast, equipped with boxed lunches, we started up the narrow road that skirts the plantation. While we moved along, Katy and Franklin (also a bird enthusiast) kept their eyes glued to the canopy, adding the Malabar gray hornbill, green imperial pigeon and crested goshawk to the tally of spottings.

As coffee bushes and silver oak gave way first to thicker growth, then to exposed ridge land, the sun began to recede. By the time we passed through one final steep pocket of damp highland forest, we were enveloped in clouds.

At the top of the peak, we were greeted by rain. We lingered for several minutes, hoping that the clouds would briefly part to reveal a glimpse of the hillsides descending into the neighboring state of Kerala. But they remained opaque -- the trail that started down the other side of the mountain might as well have dropped into an abyss.

"The views are very unpredictable," Mr. Poovanna said later. "In May, one of our guests brought back wonderful photos of Kannur" -- the seaside city over 30 miles to the southwest.

While we stood on the summit, the rain intensified. After a quick snack, we pulled on our rain jackets and hurried downhill. As we worked our way back, the dirt path we were following had turned into a rivulet. But there was still incentive to stop: an owl fluttered out of the hardwood trees in the woods above the plantation.

And soon enough, after a shower and a change of clothes, we were back on the veranda, again sipping hot coffee and watching the mists move across the far hillsides.
Comments
Coorgcoorg coffee plantationcoffee plantations