Leaders of Brazil, Russia, India, China and South Africa are attending the 11th BRICS Summit in Brazil where trade, investment and counter-terrorism are on agenda. 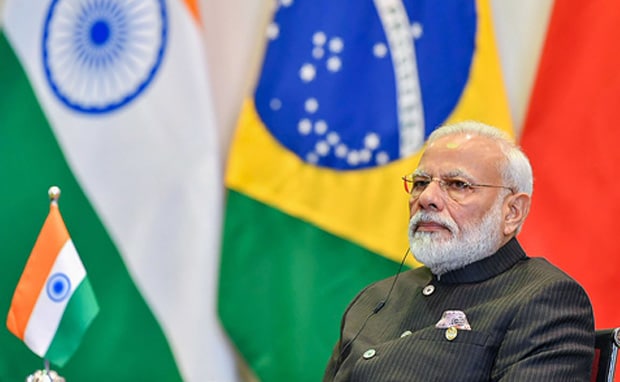 Terrorism has caused loss of nearly $1 trillion to the world economy and slowed down the economic growth of developing nations, Prime Minister Narendra Modi said today at the summit of BRICS -- Brazil, Russia, India, China and South Africa. The Prime Minister is on a two-day visit to Brazil, where the five-nation meet is being held.

"According to some estimates, the economic growth of developing nations has decreased by 1.5 per cent due to terrorism," PM Modi said at the Plenary session of the summit, welcoming the first seminar on BRICS Strategies for Countering Terrorism.

"The atmosphere of doubt created by terrorism, terror financing, drug trafficking and organised crime indirectly and deeply harms trade and business," he was quoted as saying by news agency Press Trust of India.

He also referred to the huge human cost to terrorism, saying over a decade, around 2.25 lakh people have lost their lives due to it, PM Modi said.

"I am happy that the first seminar on BRICS Strategies for Countering Terrorism was organised. We hope that such efforts and activities of the five working groups will increase strong BRICS Security Cooperation against terrorism and other organised crimes," the Prime Minister said.

The Prime Minister had also spoken at length on terror at the UN General Assembly in September.

"There is need for more anger globally about what terrorism was doing to humanity, he said.

"We belong to a country that has given the world Buddh (Buddha's message of peace), not 'Yuddh' (war). When we raise our voice against terror, it is with seriousness and anger," he added.

Leaders of Brazil, Russia, India, China and South Africa are attending the 11th BRICS Summit at the iconic Itamaraty Palace, where trade, investment and counter-terrorism are on agenda.