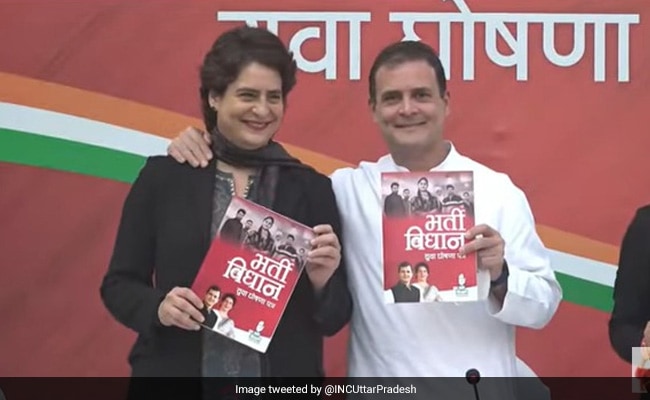 UP polls: "We unite people and we want to create a new Uttar Pradesh," Rahul Gandhi said.

Congress leaders Rahul Gandhi and Priyanka Gandhi Vadra today launched the party's manifesto for the youth of Uttar Pradesh ahead of the assembly elections, saying only the party can give a new vision to the youth in the state. The party is going to the polls with youth and women in focus and has announced that it will reserve 40 per cent of tickets for women in Uttar Pradesh.

Addressing a press conference at the launch of the 'youth manifesto' called 'Bharti Vidhan', Rahul Gandhi said the vision document is "not hollow words" but has been drafted after consulting youth whose views are reflected in it. "The youth in Uttar Pradesh need a new vision an d only Congress can give that vision to the state," the former president said.

"We don't spread hatred, we unite people and we want to create a new Uttar Pradesh with the strength of youth," Mr Gandhi added.

In her remarks, party leader Priyanka Gandhi said the biggest problem in the state is recruitment and the youth are disappointed. She said her party in UP wants the focus to be on development and not on negative propaganda based on caste or communalism that is going around.

Get NDTV UpdatesTurn on notifications to receive alerts as this story develops.
Jan 21, 2022 23:55 (IST)
UP Polls: Yogi Adityanath Hits Out At Samajwadi Party Over Candidates
Uttar Pradesh Chief Minister Yogi Adityanath on Friday hit out at Samajwadi Party over the party's first list of candidates in the upcoming state Assembly polls and said that Akhilesh Yadav's party is "rioter lover" and "tamanchawadi".
"Those whose basic character is undemocratic, criminal dynastic, talk of democracy and development from them is laughable. The list of assembly election candidates confirms that the SP is a 'rioter lover' and a 'tamanchawadi'," tweeted Yogi in Hindi.
(ANI)
Jan 21, 2022 22:52 (IST)
AAP Announces 33 Names In 3rd UP List
The Aam Aadmi Party (AAP) on Friday released the third list of candidates for the 2022 Uttar Pradesh Assembly elections.

The AAP will contest all 403 seats in the Assembly elections. In the earlier two lists, the party had already announced candidates for 191 seats out of 403. In the third list, AAP announced the names of 33 candidates. In this list also doctors, engineers, and ex-servicemen found the place.
Jan 21, 2022 21:30 (IST)

"May Contest UP Polls, But Can't Assume...": Priyanka Gandhi Vadra To NDTV
Priyanka Gandhi Vadra dropped a bombshell this morning when she hinted she could be the Congress's chief ministerial candidate for the Uttar Pradesh election. Hours later, she said she meant it in a "tongue-in-cheek" way.
Jan 21, 2022 21:30 (IST)

Will Physical Rallies Return? Election Commission To Decide Tomorrow
A decision on whether political parties will be allowed to hold physical rallies in states going to polls starting next month will be taken tomorrow at a review meeting of the Election Commission.
Jan 21, 2022 18:41 (IST)

UP Assembly Elections 2022: Loud, Catchy Campaign Songs In Yogi Adityanath vs Akhilesh Yadav In UP
Political parties have released catchy campaign songs to win voters in Uttar Pradesh, where elections are just weeks away. The country's most populous state will see a big fight between the ruling BJP and the Samajwadi Party.
Jan 21, 2022 17:44 (IST)
Uttarakhand Polls 2022: Harak Singh Rawat's Daughter-In-Law Joins Congress
Harak Singh Rawat's daughter-in-law Anukriti Gusain also joined the Congress today. The former Uttarakhand minister and his daughter-in-law joined the party in the presence of Harish Rawat, and other senior leaders.
(PTI)
Jan 21, 2022 17:35 (IST)
Punjab Polls 2022: Punjab Congress' "PunjabChanniDeNaalHai" Campaign After ED Raids
Under fire from its political rivals over the ED raids, the Congress in Punjab has launched a campaign on social media asserting that the state is with Charanjit Singh Channi and blaming the BJP-led Centre for trying to defame Punjab's first Chief Minister from the scheduled caste community.

The Enforcement Directorate (ED) on Wednesday had said it seized cash amounting to over Rs 10 crore, including about Rs 8 crore from a relative of Charanjit Channi, during raids conducted in connection with an anti-money laundering investigation against illegal sand mining operations in the poll-bound state.
(PTI)
Jan 21, 2022 17:16 (IST)
UP Election 2022: Akhilesh Yadav Will Lose If ..., Says BJP MP
Samajwadi Party President Akhilesh Yadav will lose by a huge margin if he contests from the Karhal Assembly constituency, BJP MP Harnath Singh Yadav said.
The BJP Rajya Sabha MP from Mainpuri said, "Akhilesh is nervous and scared. He is panicking these days. Sometimes rumours pour in that he will fight from Azamgarh, sometimes from Badaun, sometimes from Sambhal...The list is endless.."
(ANI)
Jan 21, 2022 16:15 (IST)
Uttarakhand Polls 2022: Expelled BJP Leader Harak Singh Rawat Joins Congress

Jan 21, 2022 16:02 (IST)
UP Assembly Polls 2022: War Of Campaign Songs In Crucial State
After Samajwadi Party's "Akhilesh aaiye" song, the bjp has launched its own song for the upcoming UP Polls titled "UP fir maange BJP sarkaar". Both BJP and SP have launched major virtual campaigns for the high-stakes elections.
Jan 21, 2022 15:22 (IST)
UP Assembly Polls 2022: Priyanka Gandhi's UP Chief Minister Teaser: "Can You See Any Other Face?"
Congress leader Priyanka Gandhi Vadra served up a major surprise on Friday morning - that she could be her party's chief ministerial candidate for next month's Uttar Pradesh Assembly election.
Ms Gandhi Vadra, who was releasing a manifesto outlining job creation plans for the youth of UP, was asked about speculation over the Congress' chief ministerial candidate for this election, given the BJP will line up behind Yogi Adityanath and the Samajwadi Party is led by Akhilesh Yadav.
Jan 21, 2022 15:04 (IST)

PM Narendra Modi Talks About Golden Era For Manipur's Development On Statehood Day
PM Narendra Modi asserted on Friday that impediments to Manipur's progress have been removed and it is now primed for fast-paced development, as he asked its people to not allow the forces that kept it down for 70 years to rear their head again. Read here
Jan 21, 2022 13:29 (IST)
Free education, farm loan waiver: Bhim Army Chief Chandra Shekhar Aazad's party in manifesto
The Aazad Samaj Party (Kanshiram) on Friday launched its manifesto for the Uttar Pradesh assembly polls, announcing free quality healthcare and education for all, fertilizer and seeds to farmers and writing off all farm loans.
The manifesto was shared on social media by party president Chandra Shekhar Aazad, who will be fighting his debut assembly poll from the Gorakhpur (Urban) seat against UP Chief Minister Yogi Adityanath.
If voted to power in UP, the ASP (K) promised fixing a minimum support price (MSP) on all crops and payment to sugar cane farmers within 10 days.
Keeping in mind the inflation, it said all tolls would be made free for commuters.
The party said the Muslim Wakf will be freed of mafia and government control and the benefits would be used for uplifting the community. After clearing encroachment on Wakf properties, schools and universities would be built on them, it added.
Jan 21, 2022 13:17 (IST)

Manohar Parrikar's Son Utpal Parrikar To Announce His Decision On Contesting Goa Assembly Polls Today
Utpal Parrikar, son of late Chief Minister Manohar Parrikar, on Friday said that he will hold a press conference today to announce his decision on Goa Assembly polls 2022. Read here
Jan 21, 2022 13:01 (IST)
If the Congress is voted to power, we will revise the budgets for a better allocation: Priyanka Gandhi Vadra
"We need to focus on the budget and allocate funds better. If you see the way in which Yogi ji spends on advertisements - be it in UP or in Delhi, or elsewhere - you will find that his advertising budget is more than many other crucial areas where these funds could be used much better, like, education or healthcare," Priyanka Gandhi Vadra said.
Jan 21, 2022 12:29 (IST)
Today the youth in UP is facing immense difficulty in getting jobs: Priyanka Gandhi Vadra
Jan 21, 2022 12:24 (IST)
UP Poll Updates 2022: Congress leader Rahul Gandhi says, "We have mentioned how party would give jobs to people in the manifesto"
Jan 21, 2022 11:58 (IST)
UP Polls 2022 Update: Chief Minister Yogi Adityanath targets Samajwadi Party
UP Chief Minister Yogi Adityanath targets Samajwadi Party, says, "People of Uttar Pradesh do not want migration, they want progress and a riot free State, Samajwadi Party free State.
Jan 21, 2022 10:32 (IST)

Goa Polls: Poor Goa Performance By AAP, Shiv Sena, Trinamool In Earlier Polls, Show Election Data
Goa appears set for a multi-cornered contest where a fractured opposition is attempting to overthrow the BJP, which has been in power in the coastal state for the past 10 years. Read here
Jan 21, 2022 09:31 (IST)
Punjab Assembly Polls: Bahujan Samaj Party Releases List Of 14 Candidates
The Bahujan Samaj Party (BSP) on Thursday released a list of 14 candidates for the February 20 Punjab assembly polls, reported PTI.

The Mayawati-led party has tied up with the Shiromani Akali Dal (SAD) for the Punjab assembly elections.
According to the seat-sharing arrangement between the two parties, the BSP will field candidates in 20 of the 117 Assembly seats in Punjab, while the rest will be contested by the SAD.
According to the list of candidates released by the party, Punjab BSP chief Jasvir Singh Garhi will contest from Phagwara seat.
Jan 21, 2022 08:32 (IST)
Goa: 4 BJP Candidates Have Criminal Cases Registered Against Them
Four out of 34 candidates announced by the ruling BJP on Thursday for the Goa Assembly elections have criminal cases registered against them, reported news agency PTI.
Atanasio Monserratte, the current MLA from Panaji, was accused of 'buying' a minor girl and raping her in 2016. The case is still pending, the police sources said.
The First Information Report in the case was registered against him under the Protection of Children from Sexual Offenses Act and IPC for alleged rape, wrongful confinement and criminal intimidation.
Jan 21, 2022 08:19 (IST)
Congress Emerging As Better Option In UP, Will Form Government In Punjab, Uttarakhand: Sachin Pilot
Former Rajasthan deputy chief minister Sachin Pilot said on Thursday that the Congress will form the government in the upcoming assembly elections in Uttarakhand and Punjab, reported news agency PTI. He also said the Congress is emerging as a better option for voters in Uttar Pradesh.
Jan 21, 2022 07:56 (IST)
Goa Elections 2022: Former BJP, AAP Leaders Figure In Congress' New List
Former BJP MLA Carlose Almeida and former AAP Goa convener Elvis Gomes featured in Congress' latest list of five candidates for the Goa Assembly elections, reported news agency PTI.
So far the party has announced candidates for 29 out of 40 seats for the February 14 elections.
Congress general secretary Mukul Wasnik on Thursday announced the list for Panaji, Shiroda, Vasco, Benaulim and Curchorem.
Jan 21, 2022 07:34 (IST)
UP Polls 2022 Update: BJP National President JP Nadda to visit Agra today
BJP National President JP Nadda is scheduled to visit Agra today. Mr Nadda will meet with office bearers of 20 assemblies of Agra-Mathura-Firozabad get updates on poll preparation as well as guide party workers.
He will also meet also hold an important meeting with party office bearers of 20 assemblies of Aligarh, Hathras, Etah, Mainpuri region.
Later, Mr Nadda will leave for Bareilly from Agra.